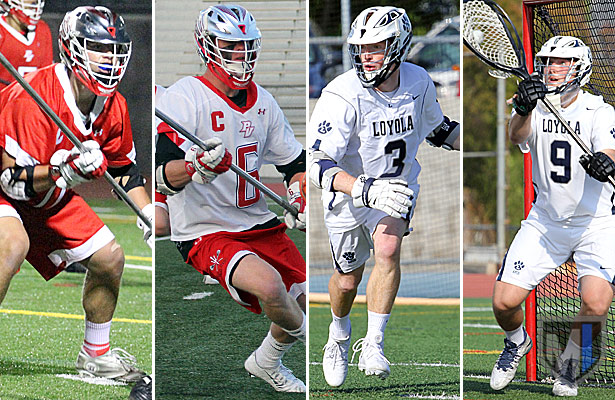 Joining Smith and Theuer as All-American from Loyola is junior midfielder Jonathan Partamian, who is committed to play at Syracuse. Smith, a senior attack, will play next year at Connecticut College. Theuer, a junior goalie, has not announced a college commitment. Partamian and Theuer are the only juniors among this year’s All-American selections.

For Palos Verdes, Jones and Sharp are joined this year by teammates Peter Henkhaus, a senior middie, and Rizal Smith, a senior attack/middie. All four will play in college next year, Jones at Georgetown, Sharp at Lafayette, Henkhaus at Marquette and Smith at Stevenson.

Two other seniors were named All-American for the second time: Midfielder Zane Crandall of Mira Costa and face-off specialist and middie Philip Thompson of Harvard Westlake. Crandall is bound for Lafayette, and Thompson will play at Princeton.

Jack Gibbons, a senior defender at Mira Costa, was named recipient of the chapter’s Bob Scott Award, given to a senior who “goes above and beyond in service to his team, school and community.”

Eight players received All-Academic recognition from the chapter, including two each from Mira Costa and Peninsula. Four of the Academic All-Americans are juniors.

The LA chapter also selected MaxLaxLA editor Jim Loftus as its Man of the Year.

“US Lacrosse All-Americans are the best players from their area. They exhibit superior skills and techniques, possess exceptional game sense and knowledge, and embody good sportsmanship.” — US Lacrosse

“A US Lacrosse All-Academic Player is one who exhibits exemplary lacrosse skills, good sportsmanship on the field, and represents high standards of academic achievement in the classroom.” — US Lacrosse

“This player exemplifies the fundamentals of lacrosse, works hard to improve his game and is a leader both on and off the field.”
— US Lacrosse

Coach of the Year

Assistant Coach of the Year

Man of the Year