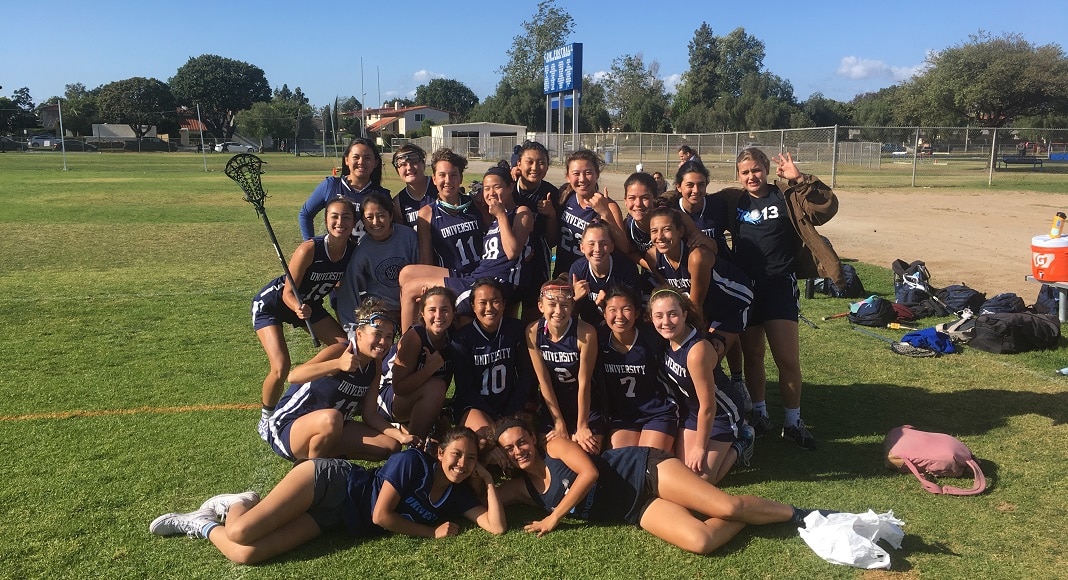 The University girls lacrosse team made history in Monday’s 8-7 win at Corona Del Mar. The Trojans beat CdM for the first time in team history, equaled their win total from last year, and continued their march to surpassing the program’s single-season win record of 12.  The Trojans will have to win two of their final three games to break the record.

“I think it was a team effort all around. I don’t think it’s an accident. I think they’ve put in a lot of time and effort to get to where they are today. The amount of energy and enthusiasm that they played with is remarkable and I can’t be more proud of that team. They’re incredible,” Trojans coach Martin Stibolt said about his team.

The game started off close with both teams trading goals, but with the game tied at 3-3, the Sea Queens went ahead 5-3 after scoring two straight. The Trojans had other plans, as they scored three straight goals of their own to take a 6-5 lead going into halftime.

CdM scored the first goal of the second half and tied the game at 6-6, but went down two players which eventually led to University taking the lead back at 7-6. The Trojans went up 8-6 off of a goal from Ashley Chandler, and with 6:06 left in regulation, Sea Queens coach Aly Simons called time out.

Ellery Amdor brought the Sea Queens to within one with 1:43 left, but University won the ensuing draw and tried to get an insurance goal. The plan backfired, as it was yellow carded for a dangerous shot, leaving them a player short the rest of the way.

With 20 seconds left CdM had a chance to tie the game off of a free position shot which had the goalie out of place. But Grace Caceros made an extended save and the Trojans held on, allowing their players to storm the field in excitement knowing that they took down their league rival.

Chandler led the Trojans with three goals while Mya Wang added two. Molly Pirus, Grace Colunga and Olivia Holmes each scored once for the Trojans, which got seven saves from Caceros.

“She [Caceros] is phenomenal. To come up with not just that out of position save, but a couple of saves before on a couple of different penalty shots, that’s really what kept us in the game. I think a lot of it was believing in themselves that they really could compete with a team like CdM. CdM is strong, all around they’re strong. Every one of their players is good,” Stibolt said.

Stibolt also highlighted the defensive play of Karissa Shin, who according to Stibolt made a lot of interceptions.

“I don’t think we were proud of how we played for the majority of the game and in the moments that we were proud it was too late. After the game, we honored the fact that Uni put up a really good fight, but also emphasizing that these girls need to dig deep and feel what it feels like to lose a game that they’re not proud about. I hope that we’re able to find that competitive drive and learn from that,” Simons said.

Simons also highlighted play from Tessa Montgomery, who has owned and confidently taken on every position Simons and her coaching staff has put her in.