Uni’s Baeksun Kim Receives the Stick With It Award. 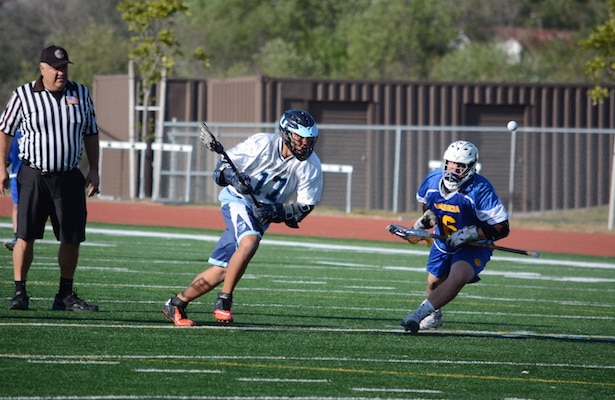 Maxlax OC would like to extend a hearty congratulations to Baeksun Kim, on being the first recipient of MaxlaxOC’s Stick With It award, given to a high school lacrosse player who has demonstrated an unwavering commitment to growing the game in Orange County, a commitment to his team, and a commitment to himself to be the best he can be on and off the field. A player that understands that true success is more than winning.

Baeksun Kim, class of 2015, was a four-year starter at University High School in Irvine, a team that did not win a single game this season. Coach Andreas Gaynor says Kim made a “great impression” on him. “He has experienced the highs and the lows of the game and continues to help grow the game.”

Two seasons ago University High School had their best squad and their best opportunity to be a top finisher in the Pacific Coast League, but lost their goalie to an out of school work program and had to just throw a newbie in the cage. They painfully lost 6 games by one goal that year.  “Baeksun and the rest of the players never wavered,” Gaynor explained proudly. The past two seasons have been dedicated to rebuilding, as 14 seniors graduated. Baeksun has been a top performer and one of the best face-off middies and offensive powers in the league with the other team keying on him every game. Coach Gaynor is quick to point out that Kim never gets a break and plays almost the entire game. Gaynor also says of Baekson has found himself through the game of lacrosse and in turn has helped University’s program to continue to grow and gain popularity.

“Even without winning a single game this season, the kid continued to show up every game and compete against the other teams best until the last whistle,” Coach Gaynor said.  Kim began to specialize in the face-off position his junior year. “I filled in the spot for our missing star, Raylin Chen who graduated a year before. I honestly didn’t have any experience or intention of filling face-off, until our team came across our first game and realized we were missing a very important role in the field, “ says Kim.

With a 5 minute face-off crash course from Coach Gaynor, Kim’s two year faceoff career began.  What is it about lacrosse that kept Kim suited up and ready to go despite never winning? He says his favorite thing about lacrosse is how adaptable it is. “Anyone can play lacrosse, from a small shy guy you see in the corner of a classroom to a varsity football captain. I was one of those shy, but not small guys you would meet, and lacrosse really boosted my self-esteem. And because it can be played by anyone, the community is very diverse, you can meet all sorts of people.”

Sometimes the most growth comes from the most challenging life events. And Kim agrees. “I learned from lacrosse that I cannot do everything by myself. There were games where I got really frustrated at my teammates and myself (mostly at myself), because we were simply overwhelmed by better teams. In those games, I tried to force myself into the goal, harming not only my body, but also the team in general. And that’s when I started to realize the importance of teamwork.”

Kim says his coach Andreas has been a mentor to him both on and off the field. “[He] taught me how to play the game of lacrosse, and how relatable it is to life in general.” He elaborates on the impact his coach has had on him: “Coach always pushed me to do more and realize my potential. He was very encouraging, and taught me solutions when I was stuck in certain problems in a game. He was always an inspiring figure and he never gave up on me, no matter how challenging I could be.”

At the center of the Stick With It Award, is the word commitment and when asked what that word means to Kim, he answered, “The word commitment is very important: it means you never give up and stay loyal for your teammates from either past, present, or future. You can’t just abandon your ship in the middle of a battle: you fight it through it or sink with it. Your team represents you, and you represent your team.”

While the high school scoreboards never reflected the true champion that Kim is, the lacrosse field help prepare him for his future, which will most certainly reveal a man of character, courage, and commitment; destined for great success.

Baeksun Kim will be attending UCSB in the fall where he will try out for the Gaucho lacrosse team.