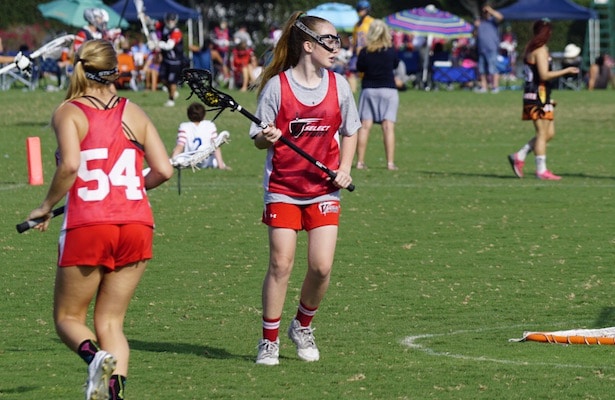 The West Girls Command and Highlight Teams held their own in Day 1 of pool play at Under Armour Underclass tournament on Friday.  Both teams finished the day with 1-1 records.  Recaps are provided below.  Pool play continues tomorrow.

The Under Armour West Highlight team beat the team representing the South, 9-7 today at  the 2017-2018 Under Armour All America Underclass tournament. Earlier in the day, the girls from the West lost a heartbreaker, 10-9, to the Upstate New York team after leading the entire game.   Play resumes tomorrow in Baltimore. Members of the West team from the OC include:  Mackenzie Wallevand, Grace Houser and Sydney Payne ( Mater Dei) and Quinnlyn Mason (Aliso Niguel).

The West team includes girls committed to Princeton, Duke, USC, Colgate,  Northwestern, Cal-Berkeley, Fresno State, Univ. of New Hampshire and Stanford.  This talented team is making waves in Maryland and prompted one opponent’s coach to yell “You can’t lose to the girls from California.”

The West Command Team (2019 and 2020 graduating classes) rebounded from a 10-4 loss to Baltimore to defeat the team from the South 11-10.  Orange County players accounted for 13 of the 15 goals scored by the West.  Hennessey Evans and Katelyn Murphy each scored two goals in the loss to Baltimore.  Players from Orange County continued to fuel the West offense in the second game.  Campbell Case (pictured above), one of only four rising freshmen on the roster, scored four goals to lead the team.  Evans added three more goals to her tournament total.  Murphy and Brooke Williams each found the back of the net once in the second game.  Joslyn Simaan, Allie Binder, Peyton Smith, Jamie Koh, and Emily Maahs are also on the West Command team.