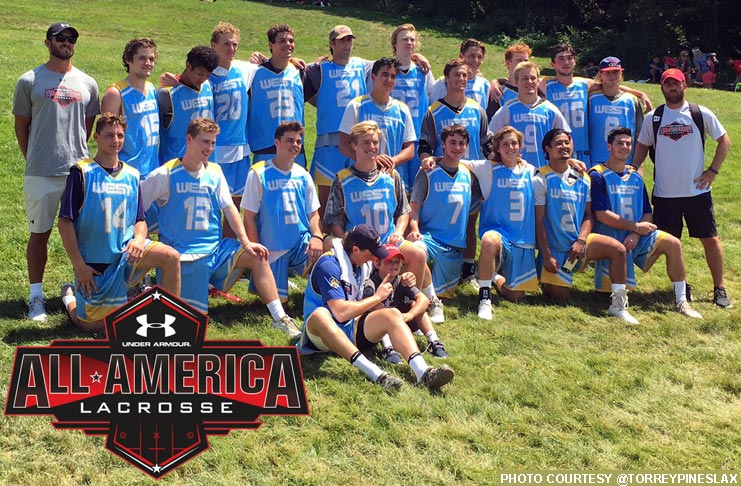 The West boys squad went undefeated in pool play before dropping a two-goal decision in the semifinals this weekend in the Highlight division (classes of 2018 and 2019) in the Under Armour Underclass Tournament at Towson University.

The Under Armour Underclass Tournament consists of two divisions of boys and girls teams from divided into 11 regional teams — Baltimore, Long Island, Midwest, New England, New Jersey, Philadelphia, South, Southwest, Upstate NY, Washington D.C. and West. The “Highlight” division is comprised of players from the the 2018 and 2019 classes, while the “Command” division is made up of players from the classes  of 2020 and 2021.

Complete scores and results from the Under Armour Underclass Tournament can be found here.

Loaded with players from San Diego, Orange County and Los Angeles, the West Highlight squad opened Friday with a dominating 17-4 win over  Upstate NY and followed that with a hard-fought 9-8 win over the South. Saturday, Ellis Geis (Foothill / Denver) scored in overtime to lift the West past Baltimore 10-9, and the West knocked off New England 9-7 to wrap up pool play with a 4-0 record.

That earned the West a well-deserved bye in the quarterfinal round of bracket play Sunday. In the semifinals, the West took a 2-0 lead over New Jersey in the first quarter but trailed 3-2 at halftime. New Jersey ultimately won 8-6, eliminating the West and advancing to the title game, where it fell 9-8 to Philadelphia in overtime.

The West Highlight team started the weekend strong by defeating Upstate New York, 11-10. However, the West lost its next three pool match-ups to South, 14-7, Baltimore, 15-6, and Philadelphia, 12-6.

The West girls rebounded Sunday to beat the Midwest team 11-10 in a consolation bracket game and finish a respectable 2-3 on the weekend.

The West Command squad opened pool play with a 9-5 loss to Baltimore on Friday but bounced back to defeat Upstate NY 10-9 for a split on the  tournament’s first day. Saturday, though, produced two heartbreakers for the West boys.

In Saturday’s first game, the West lost to the South 7-6. Later, New England posted a 9-8 win over the West to close out the pool round. The West ended the tournament on a high note Sunday, though, beating Southwest 10-9.

The West was involved in four of the nine one-goal decisions in the 30-game Command tournament. The division also featured four two-goal decisions, including Long Island’s 11-9 win over Baltimore in the title game.

The West squad opened its UA All-America weekend with a 14-8 loss to eventual pool-winner and tournament finalist Baltimore but bounced back to beat the South 13-10 to end the first day with a 1-1 record. Saturday proved to be a tough one, though, starting with a 16-5 loss to Philadelphia and ending with a 12-10 loss to Upstate NY.

Sunday, the West wrapped up its weekend with another close loss, 14-12 to the Southwest. Long Island went on to defeat Baltimore 8-6 to claim the Girls Command Title.