Under Armour All American Update 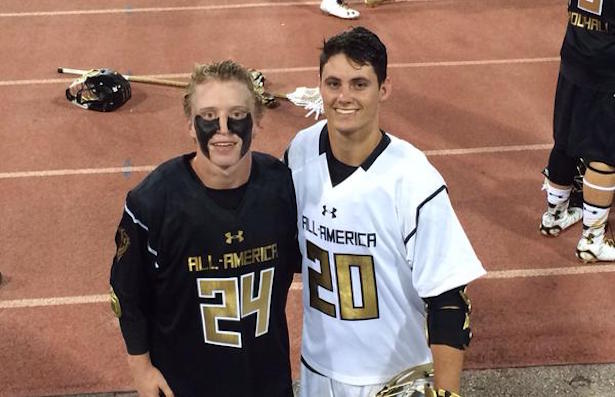 It’s been a very impressive showing for Orange County and the West thus far at the Under Armour All America Lacrosse weekend in Baltimore.

In front of a national tv audience, Corona del Mar alum Hugh Crance (No. 24 above) and Foothill alum Nate Marano (No. 20 above) showed that they can more than hold their own with the best class of 2016 players in the country.  Marano finished the night with 1 goal, 2 assists, and 3 groundballs. Crance scored a long pole goal and scooped up 5 groundballs.  Marano’s South team outscored Crance’s North team 25-17 in a shootout.

Review the box score here and check out the Inside Lacrosse game recap here.

For the second year in a row, the Boys’ Underclass West Team is making a strong showing.  They defeated Philadelphia 8-6 to complete a sweep of the Red Division.  Samuel Harnisch (St. Margaret’s; Denver) ripped off a hat trick and Kevin Kodzis (Foothill, Holy Cross) scored a goal in the team’s 14-7 win over Midwest.  Kodzis scored again in a thrilling 8-7 overtime win against New Jersey and in the 9-8 victory over Long Island.  Scotty Barger’s tenacious play at LSM earned him some IL love.  Check back tomorrow for more details.

Nick Shanks scored the game winning goal in overtime as the Tartan Trio of Shanks, Payton Fales, and Kevin Cox lead the 2016 Uncommitted Black Team to an 11-10 victory.  Cox also scored a goal.   Fales was impressive between the pipes and showed off his athleticism with a couple highlight saves.

The Girls’ Underclass West Team has not fared as as wells as the boys, going 0-3 thus far.