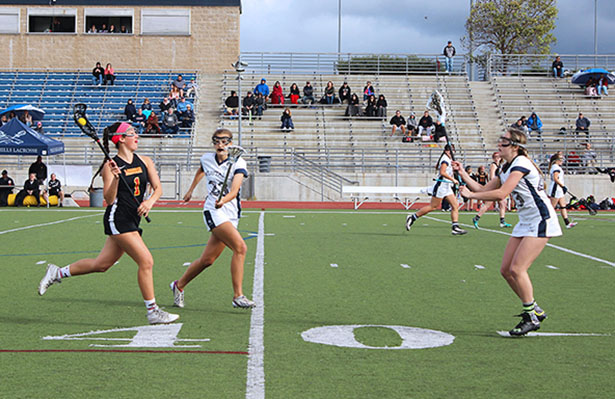 Mission Viejo High School junior Maryn Macha recently verbally committed to play NCAA Division I lacrosse at UC Davis. Not surprisingly for a player of Maryn’s caliber, she’s got a couple lacrosse achievements under her belt.  Macha accomplishments include selection as an  Under Armour All-America Underclassman, a US Lacrosse/Orange County Chapter national team member, and one of San Diego’s Pacific Falcons that we claim as one of our own.  At the core of it all, Macha is the Mission midfielder with speed and endurance that takes her coast to coast on the field.  She battles with a dynamic set of offensive and defensive skills that UC Davis Women’s Lacrosse will soon claim for itself.  To find out more about her commitment, we talked to Maryn and her mother Jennifer, newly named Treasurer of the US Lacrosse OC Chapter Board.

MAXLAXOC: Maryn, who was the first person to call you “Murrrrrn?”

In a nutshell, how did your lacrosse career start and come to be what it is today?

My older cousin, Megan Armes, started playing when she was in middle. She was such a role model in my life and when she picked it up, I just had to. She also plays Division 1 lacrosse at Saint Mary’s. So basically I’m following in the family footsteps haha.

When and how did you realize you wanted to play college lacrosse?

The idea of playing college lacrosse at first seemed crazy, but after I started playing with the Falcons, my coach really improved my game and I realized just how much I loved playing lacrosse.

What made UC Davis “The One?”

I met with the team at a summer camp and I instantly loved the atmosphere and the energy the players and coaches brought. We also toured the campus and it was amazing! I could really see myself playing and attending school there.

You are a junior in high school, set with a college lacrosse career in your horizon.  What goals will you achieve for your last two high school seasons?

I’m hoping to help my team to a league championship and a spot in CIF.

What anticipations do you have for UC Davis?

I’m going to work as hard as I can and hopefully help my team to a division title.

Who would you say is your biggest supporter?

My parents have really sacrificed a lot for me to play lacrosse and given up their time to take me tournaments and travel with me. I’m so thankful to have people like this in my life who support me and push me to do my best.

MAXLAXOC: Jennifer Macha, what are you usually doing in the bleachers watching Maryn’s games?  Are you a rowdy crowd-raiser?  A pensive play-watcher?

Jennifer: I really enjoy watching the games and meeting other parents on the sidelines.  I also love to cheer Maryn and her teammates on. It’s hard for me to stay seated for the entire game.

What kind of player is Maryn Macha, the Midfielder from Mission?

Maryn is an extremely hard-working, competitive, team player.  She gives it her all in every game, and is constantly looking for ways to improve.  She has a good attitude, respects authority, and is passionate about the game.

Aside from living the life of Mama Macha, you are the new Treasurer of the US Lacrosse OC Chapter.  In hindsight, how did you and your daughter come to be so involved in the lacrosse community?

Maryn learned about lacrosse through her cousin Megan Armes, who also played at Mission Viejo HS.  Maryn started playing in 7th grade with La Paz Storm and met a lot of wonderful, responsible girls.  She was also fortunate enough to participate in a few national tournaments, and eventually joined the Pacific Falcons Club team, where she bonded with her teammates and coaches. I, too met many positive, supportive, parents who were involved in the lacrosse community who have dedicated countless hours toward building and strengthening our local program. I am happy to help.

How would you say you and Maryn tackled the adventure towards college recruitment?

Would you have any advice for parents who seek to do the same?

Be supportive and stay positive throughout the entire experience.  Have realistic expectations.  There are many programs out there that will be a fit for your child.  It can be frustrating not being able to hear back directly from coaches, but don’t give up.

How do you feel about UC Davis?

I am thrilled and thankful to Coach Henwood for giving Maryn the opportunity to be a part of such an amazing school and team. I really enjoyed the campus tour which allowed us to get a feel for life on campus.  The students seemed very down to earth, with a positive vibe.  There also seemed to be a lot of newer construction and renovation, as evidenced by the Mondavi and student recreation centers.  I also liked the college town feel, with campus bus transportation available to students throughout the city.  No car necessary.  There is even a shuttle to take students between Cal and Davis.  It felt very safe.

Are there any supporters, friends, family, coaches, etc., that you would like to shout out to for contributing to you and your daughters’ lacrosse success so far?

I would love to thank Joe Brown for all of his support and guidance throughout this entire process. I especially appreciate his honesty, knowledge of the sport, and dedication to his lacrosse family. I would also like to thank Maryn’s high school basketball coach David Yates who has has provided words of encouragement, and has taught discipline and teamwork to his players.  Also a special thanks to some of Maryn’s other coaches, each who have made an impact on her as a lacrosse player: Coach Erin, Kristin, Karen from the Falcons, Coach Laura (UCLA), Coaches  Dave, Molly and Emily Elkins, Coach Lee Danbara, Roger Brent and  Darren Payne. Also to my amazing niece Megan Armes who makes us proud every day!