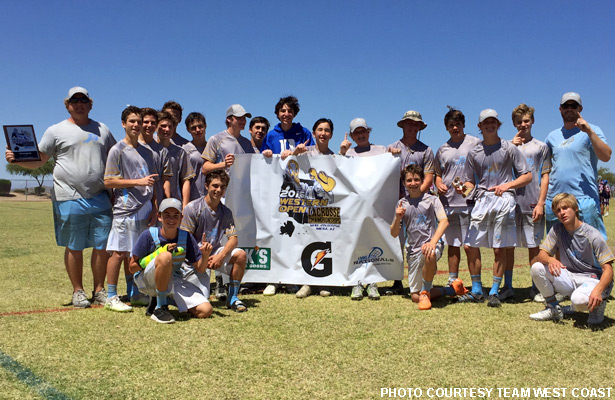 Team West Coast opened its summer season with a bang last month, winning titles in the U15 and U13 divisions at the Western Open Lacrosse Championships in Arizona, one of 22 regional qualifiers for the IMG National Tournament.

Both the TWC 2020 and TWC 2021 squads are made up of players primarily from the Conejo and San Fernando valleys and are under the direction of Justin Eaton and Chaminade head coach Steve Lane. The club recently watched its Class of 2016 team graduate, with 14 players committed to play in college, including three at NCAA D-I schools and seven at NCAA D-III.

The TWC 2020 team went undefeated in three tournaments last summer, winning the U13 elite divisions at the Lake Tahoe Summit Classic, the Pacific Lacrosse Festival and the Tribz California Showcase. The group opened this summer in similar fashion, winning the eight-grade division at the San Diego Jam By the Sea in March, then winning five games to claim the U15 title at the Wester Open in May.

“This U15 team is one of the best out here, hands down,” Lane said. “When we have the full team together, and they’re not scattered by football, they’ve won every tournament.”

In Arizona, TWC 2020 went 3-0 in pool play and beat the Southern Nevada All-Stars 10-3 in the semifinals. In the championship game, they beat Brady’s Bunch 5-2. Next up for the group is the Lake Tahoe Summit Classic on June 17-19, followed by the Pacific Lacrosse Festival on June 35-36 and the NXT Philly Summer Invitational in July.

After last summer, the success of TWC 2020 isn’t all that surprising. But Lane said he wasn’t necessarily expecting TWC 2021 to come out of the gate with a title at the Western Open.

“They definitely were a bit of a surprise,” Lane said. “We took them to the World Series of Youth Lacrosse qualifier [in April in Irvine). That was so hard — the teams there were so good, and our guys did not show up very well. It was a brand-new group and a really hard tournament.”

TWC 2021 went 0-4 and was outscored 42-15 at that qualifier. Six weeks later, though, the group showed up in Arizona and tore through three pool games with 39-8 goal differential, then beat Arrowhead 10-1 in the semifinals and Brady’s Bunch 5-2 in the championship.

“This is a new team, so this is kind of a fresh start for them,” Lane said. “It’s nice to see that they’re ready to perform now.”

TWC 2021 also will head to Tahoe and Pac Lax, then will finish its summer at the All-West Showcase in early July.

Both squads then will embark on a fall practice schedule in preparation for the IMG Nationals in Bradenton, Fla., on Nov. 19-20.