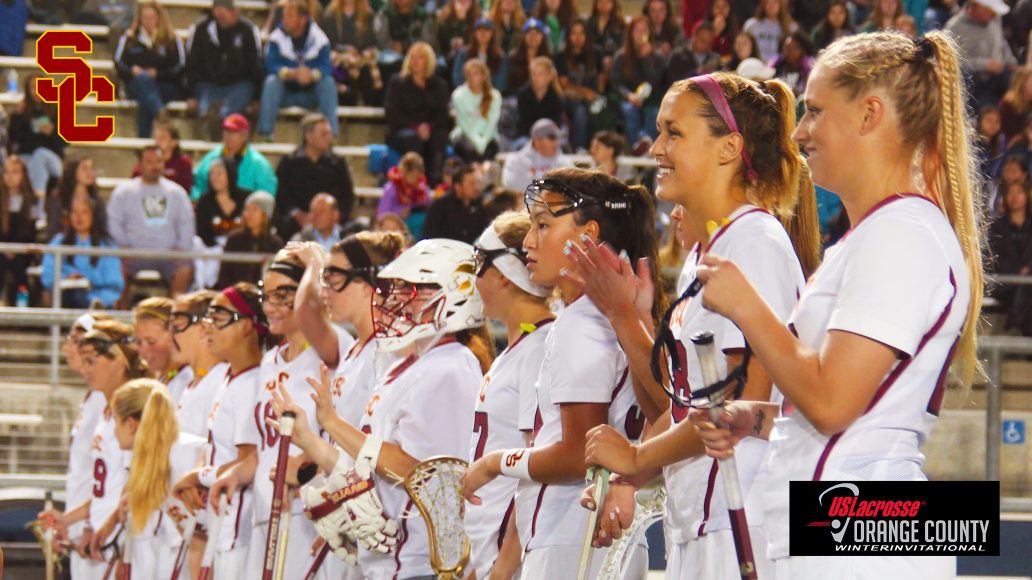 The No. 19 USC Trojans conquered No. 5 Duke University 11-5 on Saturday, claiming Southern California ground at OCC as their turf. As big as the win was for USC, though, the inaugural US Lacrosse Orange County Invitational was an equally huge victory for the local lacrosse community, with a crowd of 2,000 strong turning out to watch.

As the Saturday sun began to set, high school teams devoured mac n’ cheese, hot dogs, and burgers before the #DUKEvsUSC Division I NCAA game. They got the memo. The night would provide a rare opportunity for their team to bond over great food and company, all while watching some of the best lacrosse in the nation. 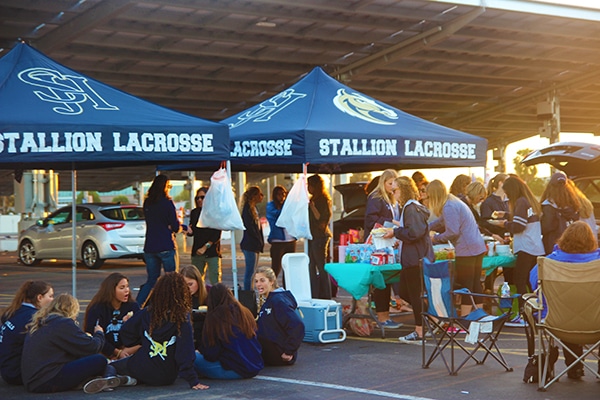 “Southern California is a hotbed of talented athletes in many sports,” said John Fischbeck, president of the US Lacrosse Orange County chapter. “I’m committed to exposing our kids to the highest levels of lacrosse so they understand what they can aspire to. That goes for officials, coaches, and, most of all: parents. After all, they are the ones paying the bills!”

Within the first three minutes of game, USC Cynthia Del Core scored assisted by California local Kylie Drexel. Another one by  Michaela Michael came a minute later. Before seven minutes of half had passed, Caroline de Lyra hammered in third goal off a free position. Stunned, Duke called a timeout.

Fifth-ranked Duke Women’s Lacrosse may have been touted the likely winner of #DUKEvsUSC. As far as the first 10 minutes of the game, it didn’t look like it. USC maintained its lead by means of a brick-wall zone defense, composed offensive possession and turnover capability all over the field. In addition to de Lyra, the Trojan Cali girls Michael and Drexel were leading scorers.

At halftime, a friendly exhibition youth girls’ lacrosse game featured home-grown players from the Pacific Falcons and NOC Lacrosse. Thirteen-year-old NOC midfielder McKennah Renfaro told MaxLaxOC how the #DUKEvsUSC game made her feel about lacrosse: “I feel inspired and determined to practice harder and get better out on the field.” She was all smiles after her exhibition game.

Renfaro and the rest of the SoCal 2,000 watched USC hold Duke to a mere three goals for a large part of the second half.

“We’re East Coast people,” said Agoura junior captain and midfielder Lauren Harrison, “so we want Duke to win.”  With about seven minutes left, Duke began to pressure the USC offense. It was a moment of desperation against a confident, poised USC team that was ready to fight on.

The Trojans put themselves on the map with the 11-5 victory. Livv Gerton, USC women’s lacrosse Class of ’15 alum said, “This is a big deal, since we were knocked out by Duke last year.”  The 2015 NCAA tournament loss against Duke now stands in stark contrast to USC’s OC Winter Invitational win.

Holly Reilly, OC US Lacrosse girls high school chair, later told MaxLaxOC, “The Duke vs. USC weekend is one that many Orange County youth lacrosse players will remember forever. Young players were in awe of the size, speed, athleticism and skill of both collegiate teams. Lacrosse at the next level is now very much a reality for California players, and California domination is on the rise.”

“As a coach and for my team,” said Foothill coach Kate Hick, “watching the physicality, emotion and finesse of the Division I game left them and myself inspired to coach and play at that level. I think girls in this area now see what the game is supposed to look like and how amazing this sport can be. They commented how, from the beginning of warm-ups to the final whistle, neither team dropped their level of intensity. My defenders were in awe of Duke’s relentless attempts to cause turnovers at the end of the second half, and my attackers were impressed by the ball movement and drives of USC. On Monday, I saw a new intensity.”

Keeping the next invitational in mind, Southern California lacrosse can expect this kind of growth to flourish in all aspects of the game. Together, the lacrosse community found inspiration in the USC team.

Reilly says, “I am so grateful for the Duke and USC programs who made this weekend possible, and I look forward to future US Lacrosse events that inspire Orange County players to dream big.”