Trojan Players to Watch for #DUKEvsUSC 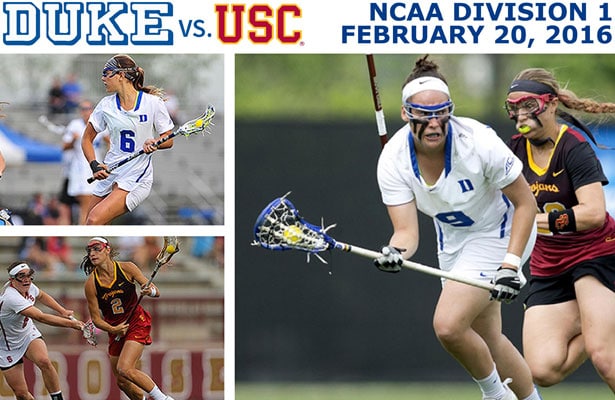 The US Lacrosse Orange County Chapter brings NCAA Division 1 lacrosse to Southern California on February 20, 2016 when USC plays No. 3 Duke in the inaugural Orange County Winter Invitational. The game will be played at Lebard Stadium on the campus Orange Coast College. Tickets are on sale now.

The up and coming Women of Troy are set to atone for their loss to Duke in the second round of the 2015 NCAA Championships.  This season, the Women of Troy endeavor on the fourth year of program existence under head coach Lindsey Munday.  USC Women’s Lacrosse will build on a rapid,  Northwestern-like trajectory that recently culminated in a NCAA tournament bid for 2015.  Last season’s record was 15-3, which is a stark contrast to the 5-10 record of USC’s inaugural year.

Of those three losses, one was to Duke University.  Tickets are on sale now for their #DUKEvsUSC rematch at the OC Winter Invitational on Feb.20, where all lacrosse eyes will scout the field for Trojan standouts.  In the first blast of a MaxLax double-header for both USC and Duke, we present you five Trojan players to watch.  Check back next week when we scout out the Blue Devils.

Upon her commitment to USC, Johns told Inside Lacrosse, “I describe my play as being very dynamic, athletic, and aggressive. I am constantly moving and going for interceptions outside of the cage. I started out playing field in boys lacrosse when I was 4 and that has given me the confidence to move outside of the goal and really utilize my speed and stick handling skills.”

After a stellar high school career earning No.6 prospect rank by Inside Lacrosse, Johns entered USC and debuted an equally stellar freshman season.  Her performance against Stanford won her Inside Lacrosse Rookie of the Week then pushed her team to their first MPSF Tournament game.  Whether her aggressive goalkeeping has heightened, finessed, or flatlined is a mystery we look forward to solving at #DUKEvsUSC.

This touted New York offender brings selflessness and big play to the Trojan attacking end.  She was a standout freshman in 2013: team leader in goals, assists, points, and shots; and ranked top five for points and points per game in the NCAA.  This same season at USC, she was honored with MPSF All-Conference Second Team and WomensLax.com Rookie of the Week (Feb. 25).  The next year, de Lyra once again led the team in points and assists after a season that earned her IWCLA All-West Region Second Team, MPSF First Team and All-Academic Team.

Johansen is of inauguree stock, having been a three-year starter for USC since its inception. Johansen was most recently named IWLCA All-West/Midwest Second Team, a twinning honor to the same title last year.  In the past, Johansen has earned IWLCA All-West/Midwest First Team,  MPSF Rookie of the Year, MPSF Offensive Player of the Week (April 6), and MPSF All-Conference First Team.

In her freshman season, Johansen held the MPSF record for draw controls at 95.  One highlight of her career was playing against SDSU, when her four goals and assist helped the team win and advance to the MPSF Championship Tournament.  In their inaugural season, this achievement was not expected for USC.  Johansen was also a three-time MPSF Rookie of the week.  She’s not a rookie anymore.  As she chases the tail end of her college career, we can expect this captain to be a leading presence on the field.

Courtney Tarleton is USC’s top defender.  Tarleton was also most recently given a IWLCA All-West/Midwestt Second Team title, which is her third all-region certificate.  She was designated captain her freshman year, a compliment to the leading performance that earned her MPSF All-Conference First Team.  In her last season, Tarleton caused 18 turnovers and won 34 ground balls.  She also won MPSF All-Tournament Team, All-Academic Team, and Defensive Player of the Week of April 28, 2014.

What can be said about Tarleton is a microcosmic reflection of the USC defense in general.  Together, the team allowed only a 8.70 goals-against average.  With a 66% clearance rate last season, Tarleton led her teammates to spur offensive possession on the other side of the field.  Tarleton has reached the culmination of a solid college career.  Will she continue to power one of the most disruptive defenses in the country at #DUKEvsUSC?

Look out.  Michael is comin’.  Not Michael Jordan.  But hey, Michaela Michael might as well be the Jordan of the USC offense.  Last season as a sophomore, Michael made an achievement for the books by becoming the team’s first All-American in the history of their existence. Why? For one reason, take a look at her stats and notice draw control.

The numbers speak louder than words, but here’s context about a player shaping up to shape some of USC Women’s Lacrosse history.  Michael is a Menlo HS grad from Hillsborough, CA.  She picked up lacrosse in fourth grade.  Mercury News reports her high school coach Jen Lee saying, “She’s our first kid ever, homegrown Californian, who is going to be trying for Team USA in June in Maryland.” Michael did not make Team USA, but Team USC snatched her up and earned her recognition as MPSF Rookie of the Week (March 17), MPSF Player of the Year, and the record-holder for draw controls in a game (15), in a whole season (123), and goals in a season (63).

This West Coast native is currently up for Lacrosse Magazine #BestofLax Best Women’s Breakthrough Player.  Does she win your vote?  More importantly, will you see her play at #DUKEvsUSC?

Purchase your tickets for #DUKEvsUSC of the inaugural OC Winter Invitational here.