Tritons Rout Mustangs to Improve to 4-0 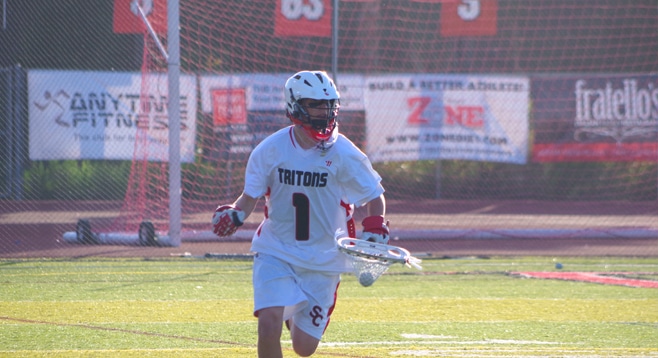 San Clemente faced a much-improved Trabuco Hills team Monday in San Clemente but continued its dominance over their league rivals with a 15-2 rout. No. 5 San Clemente improved to 4-0 on the season while Trabuco fell to 3-3 after starting the season 3-0 behind first-year coach Johnny Rodriguez.

The Tritons blazed out to a 6-0 lead after both teams started out sloppily. Senior Collins Zines (5 goals, 1 assist) and Austin Streeter (2 goals, 1 assist) got the Tritons started, then Torin Alm (3 goals, 2 assists) and Jack Renard (3 goals) did the scoring damage before Trabuco Hills’ impressive sophomore Harrison Evans got the Mustangs on the board with a lefty rip from outside. Teammate Jake Marthens then scored on an assist from Andrew Blume to cut the Tritons’ lead to 6-2. But that was all Trabuco would score, as San Clemente’s defensive combination of goalie Austin Boyer (6 saves) and a dominating defense led by sophomore Caleb Bozarth‘s four ground balls, four clears and three takeaways, Stone Sims‘ three ground balls, three clears and three takeaways and Max Lepley‘s 2 GBs, one clear and one takeaway shut down the Mustangs attack.

Leading 9-2 at the half, SC scored the next six goals for the final 15-2 margin. Freshman midfielder Matt Keany scored his first varsity points with a goal and two assists, while senior midfielder Peyton Garrett added a game-high four assists and senior Austin Lickley added one goal, one assist, three ground balls and a takeaway.