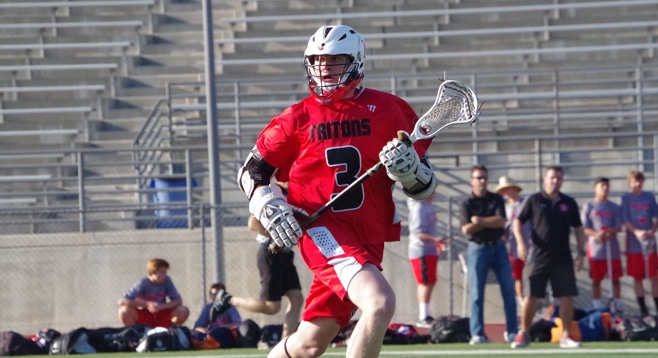 San Clemente powered to a 5-0 first-quarter lead against a determined Trabuco Hills zone defense and ground down the host Mustangs in a 14-3 league win Tuesday night. The Tritons improved to 11-4 (6-0 in South Coast League) while the Mustangs fell to 6-9 (1-5 in league).

Five different Tritons got the scoring started in the first quarter, as Jack Renard (3 goals, 3 assists), Austin Lickley (1 goal), Torin Alm (1 goal, 1 assist), Peyton Garrett (2 goals, 2 assists) and Austin Streeter (4 goals) all scored against the Mustangs’ stingy zone defense. Garrett’s second of the night in the second quarter extended the lead before Joey Clark scored off an assist by Jake Marthens to get the Mustangs on the board.

San Clemente kept the pressure on in the third quarter, outscoring Trabuco 5-1 to take an 11-2 lead after three quarters. Collin Zines (1 goal, 3 assists) and Nick Lemus (1 goal) got in the action, while Renard notched a pair and Streeter had one. Marthens scored the lone Mustangs goal in the frame.

In the fourth, Streeter scored twice and Garrett Eslick added one while Andrew Blume scored unassisted for Trabuco for the final margin.

Next up for SC is a home matchup against San Diego power Rancho Bernardo on Friday night at 7:30 p.m. Trabuco Hills next travels to El Dorado on April 25.