In a busy week of non-league games for the Trinity League teams, No. 17 Mater Dei (3-0) set the pace with a pair of  wins.

Led by Sean Waterman’s seven points (4g, 3a), the Monarch’s began the week with a 13-3 win over Norco on Tuesday. Mater Dei began the game with an early 3-0 lead after the first quarter and took a 5-1 advantage into halftime. The Monarchs pulled away with six more goals in the third quarter, and cruised to  13-3 win. Freshman attack Zach Torres (three goals) and senior midfielder Nick Sando (two goals) rounded out the scoring leaders for the Monarchs. Senior goalkeeper Sean Homsy had six saves in net.

In Thursday’s game against Dana Hills the Monarchs stormed out to a 7-0 first quarter lead. They would go on win the game 16-0.

“From top to bottom, we wanted to fine tune today,” said head coach Johnny Rodriguez after Thursday’s win. “We did a good job at it.”

For a complete recap of Mater Dei’s dominate performance over Dana Hills, check out our full in-game coverage HERE.

Up Next: The Monarch’s will hit the road for the first time this season as they visit Edison (1-0) on Tuesday and No. 13 Beckman (0-1) on Thursday.  On Saturday Mater Dei will clash with Trinity League rival Servite on the road at 2 p.m. Fun Fact: Rodriguez and Beckman head coach Matt Cannone are roommates.

The Eagles began their quest for another deep postseason run on a positive note Friday night as they defeated No. 7 El Toro 9-6.

While Santa Margarita jumped to an early 2-0 lead, El Toro went on a 4-1 run and took a 4-3 lead into intermission. The Eagles, however, came out firing in the second half, going on a 6-2 run of their own to eventually seal the three-goal victory. 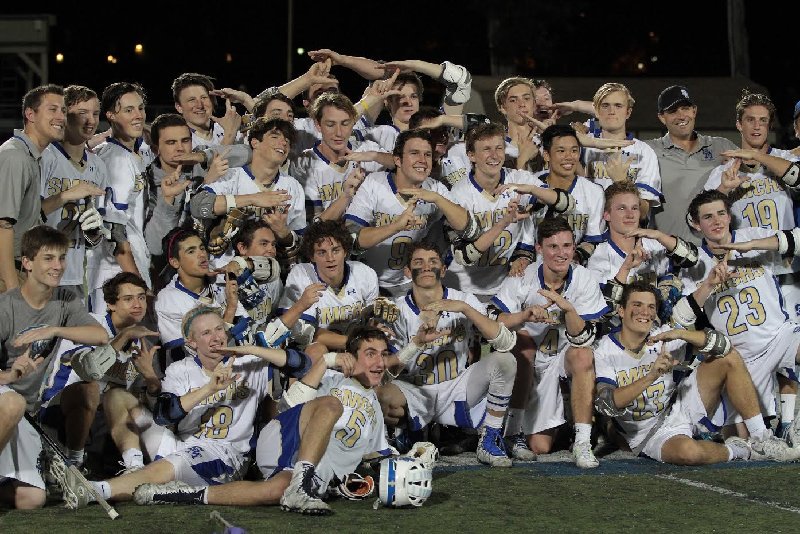 The Friars began the week with a tough 12-9 loss to No. 19 Santiago on Tuesday. Santiago took a close 6-5 advantage into halftime, which they extended to 9-5 after three quarter.   The Friars found their offensive rhythm in the fourth quarter with four goal but it was not enough to catch the Sharks.  Eight different Friars scored goals in Servite’s balanced offensive. Junior midfielder Zach Williams led the team with two goals.

The Friars got back on track with a 13-10 win over No. 14 Huntington Beach on Friday. Servite took a 10-1 lead into the half, but HB came out firing in the second and put Servite on their heels within the final minutes of the game. The Friars, however, squeaked out the game in a three-goal advantage.

“We got complacent but pulled it out,” said head coach Tom O’Leary after Friday’s win in a text message. “Huntington fought tooth and nail to get back into the game and I give them a lot of credit for how hard they worked.”

Up Next: Servite will hit the road Tuesday as they take on Mission Viejo at 7 p.m. Following Tuesday’s road contest, the Friars will return home for two as they host No. 12 Trabuco Hills on Thursday (7 p.m.) and rival Mater Dei on Saturday at 2 p.m.

JSerra began the season Wednesday night at home against No. 16 Aliso Niguel, but dropped the game 11-2. Aliso Niguel scored two early goals within the first three minutes of the game and never looked back. For a complete recap of JSerra’s opening night loss, check out our full in-game coverage HERE.

Six unanswered Capistrano Valley goals in the third quarter cost JSerra Friday night’s home contest.   Trailing only 6-5 at halftime, JSerra tied the game at 6-6 in the third before the Cougars went on their six-goal tear. The Lions were able to shut down the Capo offense in the fourth quarter but ultimately lost the game 13-7.

Head coach Brendan Porter thought his squad put forth a better performance on Friday, but wanted to see how the team would handle the adversity that him them in the third quarter.

“I didn’t want to ‘step in and save the day’ because I need to see how they handle adversity, who steps up and leads, and use it as a teaching moment,” Porter said via text message. “It’ll help us in the long run.”

Up Next: JSerra only has one game this upcoming week as they head north to take on the Marina Vikings (2-1) on Wednesday. The game will begin at 6 p.m.