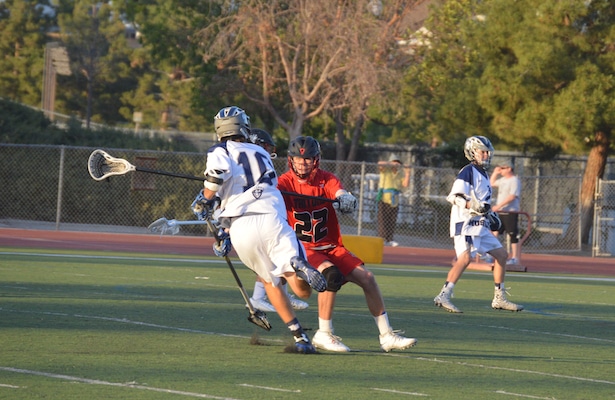 No. 7  Trabuco Hills became the sole occupants of first place in the South Coast League when they beat San Clemente 13-5 on Friday.  In doing so, the Mustangs avenged one of their two losses this season.  The star of this game was the Trabuco defense.  Led by Scotty Barger, Patrick Zanio (pictured above), and goalie Nick Wilson the Mustangs held the Tritons scoreless in the fourth quarter to clinch the victory

The Mustangs got a running start, opening up a 3-0 lead in the first quarter. A nice running right-hander from Andrew Blume (2 goals, 1 assist) got things started, and then Jake Marthens (2g, 1a) turned good defense into offense when he caused turnover at midfield and fed Wyatt Koudelka (1g, 2a) cutting across the crease for the second goal of the quarter. Blume then buried his second goal of the quarter.

The Tritons got on the board twice in the second quarter but were not able to pull closer. Brandon Wilson (2g) finished a nice feed from Cameron Jonas (1a), and Matt Keany (1g, 1a) scored on a nifty running lefty to account for the Tritons’ second quarter points. The Mustangs scored three of their own in the second frame to send them into the locker room with a 6-2 halftime lead. A Marthens rip from the left side, a Harrison Evans (3g, 1a) running right hander, and Troy Fenner (1g) fast break, assisted by Billy Barron (3g, 1a), proved the Mustangs’ second quarter scoring. Scotty Barger (5gb, 4cto) triggered the fast break on Fenner’s goal when he intercepted a pass and headed in the other direction.

San Clemente upped their production in the third quarter with three goals but once again lost ground. Wilson scored his second goal of the night on a nice feed from Matt Keany and then Garett Eslick (1g) found the back of the net with a nice left handed rip to tighten the gap at 6-4 in favor of Trabuco. Evans answered for the Mustangs by converting a ground ball into a sweet left handed runner to make it 7-4. Jack Renard (1g) drilled a left-hander on the next possession to get San Clemente right back to within striking distance at 7-5. Marthens responded by drilling his own left-hander top shelf rip to extend the Mustang lead to 8-5. At this point Trabuco Hills, led by Wilson (13 saves) began to play some tenacious D and shut the Tritons out for the rest of the game.   Defenseman Patrick Zanio (1g) found the back of the net with a long pole goal to give the Mustangs another fast break goal, and a 9-5 lead. Then Barron finished off the third quarter with a nice wrap around goal from the right side to give the Mustangs a comfortable 10-5 lead heading into the final quarter.

Trabuco kept it rolling in the final period with a goal from Evans and two from Barron to give the Mustangs a 13-5 victory and first place in the South Coast League.

When asked about the impressive win coach Johnny Rodriguez said “ This may be our best effort of the season, we got such incredible play from our defense especially Nick (Wilson) and Pat (Zanio) wow he had a killer game. I am just so proud of this team, we came into tonight with 5 goals to accomplish in order to achieve victory and we accomplished all five of those goals tonight.”

The Mustangs are now in the driver’s seat in the South Coast League and control their own fate with home games next week against league opponents Aliso Niguel and Capistrano Valley.