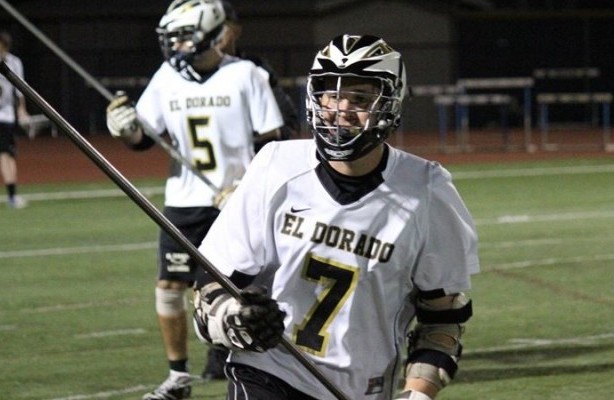 The Trabuco Hills Mustangs traveled to El Dorado High School needing a win to keep their slim playoff hopes alive.  The Golden Hawks were determined to play the spoiler by raising their level of play.  The fans were treated to an exciting back and forth game with El Dorado coming from behind in the second half to force the game into overtime.

The Hawks were able to get on the board first when Trevor Van Dissel found the back of the net on their first possession.  The Mustangs answered however with an unassisted goal by Harrison Evans.  It was apparent that El Dorado came to play and got goals from Alec Simpson and Jacob Clark.  Jake Marthens of the Mustangs hit next with an assist from Joey Clark and a goal by Andrew Blume evened things up and the first quarter ends all square 3-3.

Trabuco Hills got rolling in the second quarter with unassisted goals from Evans and Marthens and then Blume gets his second of the night on a nice feed from Billy Barron.  El Dorado stays in it with  Alec Simpson’s second goal of the night and Sean Kinnane added goal number 5 for the Hawks.  The first half  finished up with a nifty Ben Nguyen to John Kauo combo and Jake Marthen’s top shelf rip to add to the Mustangs lead.

The second half finds the Mustangs up 8-5 but a man down for 2 minutes unreleasable and the Golden Hawks took full advantage and scored quickly on Clark’s second goal of the night and a goal by cutter Andrew Hubner assisted by Simpson. The momentum turns at this point and the Hawks find themselves trailing 8-7 early in the third quarter.  The Mustangs battle back with a goal from Evans off an assist from Wyatt Koudelka and Marthens adds another but the Golden Hawks get another score from Alec Simpson and Jack Wagner finds the net to bring El Dorado within one again 10-9.  Jake Marthens got his fifth goal of the night assisted by Barron and the third quarter ended with the Mustangs leading 11-9.

The El Dorado defense did all it could to find victory in this one as they held Trabuco scoreless in the fourth quarter.  The offense grabbed the momentum again off a nice outside rip from Tyler Kammer and when Sean Kinnane got his second goal of the night we are all tied 11-11 with 2.30 left in the game.  The Golden Hawks can smell blood and dominate possession and have two good looks go off pipe as the clock wanes down to zero and we have overtime.

The Mustangs get a face off win from Harrison Evans and quickly call a time out.  Trabuco Hills moves the ball around a couple of times and the Sophomore stand out Harrison Evans gets his fourth goal of the game with a nice dodge and rip from 10 yards to put the game away two minutes into the extra period.  Mustangs Head Coach Johnny Rodriguez said after the game, “this was an exciting finish, it should have never been this close.  I need a better effort from my defense but we will use the excitement going into our last two games next week.”

The Mustangs (7-9) wrap up the regular season with home games against Tesoro on Tuesday and El Toro on Thursday.  With those games comes the opportunity finish the seasonseaon at 0.500.  El Dorado (3-11) travels to Valencia on Monday and hosts Esperanza on Friday in their season finale.