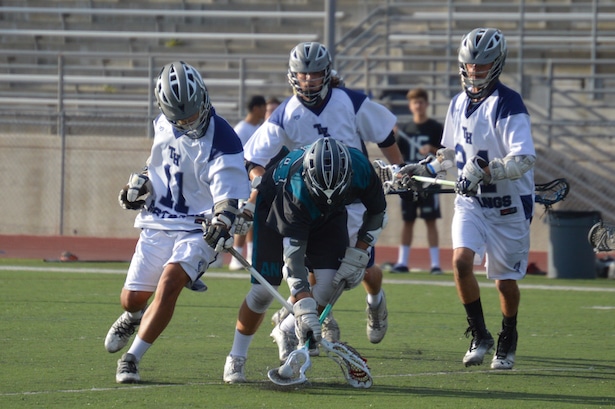 The Trabuco Hills Mustangs returned to South Coast League action on Tuesday, April 19th when they hosted the Aliso Niguel Wolverines. The Wolverines were forced to play without recent Cal State Fullerton commit Garret Hoang and starting defensemen Nick Hatalski who both missed the game due to injuries. The Mustangs were looking to rebound from their recent loss to the Tritons of San Clemente.

Aliso Niguel jumped out to an early 1-0 lead with a goal from Aaron White (2g) off a faceoff win and fast break. Aliso Niguel’s momentum was short lived as the Mustang’s quickly responded with four unanswered goals. The Evans brothers got things started when older brother Harrison fed his younger brother Holden for a finish inside. Holden Evans (3g, 3a) followed with a beautiful righty dodge from up top and a left handed finish to put the Mustangs ahead 2-1. Jason Kauo (1g) finished off a nice pass from Holden Evans, who finished the first quarter with two goals and an assist. Harrison Evans finished off the first quarter scoring with an unassisted goal bringing the score to 4-1, Trabuco Hills.

The second quarter was dominated by the Mustangs defensive unit of Scott Barger (1a), Jonathan Salgado, Patrick Zanio, and recent Concordia, Wisconsin commit Jason Rivera. The Mustangs defensive unit successfully killed all 6 man down situations with assistance from defensive midfielder Hunter Hitt and long pole Josh McEnally. The Mustangs controlled the tempo and ball possession throughout the second quarter, only conceding one goal from the Wolverines Jeremy Traub (2g) on an assist from Jake Lombardo (1a). The Mustangs tallied six second quarter goals from Harrison Evans (4g, 1a) Billy Barron (4g, 3a), John Kauo (1g) and Wyatt Koudelka (1g, 2a) to finish out the first half with a 10-2 lead.

The second half saw the Mustangs empty the bench to allow a number of players the opportunity to see significant South Coast League play. The Mustangs backups held their own with consistent offensive possessions and stellar team defense. Mustang’s goalie Nick Wilson finished the evening with 7 saves and a 63% save percentage. The Wolverines received two fourth quarter goals from White and Traub who was assisted by Sam Chassey (1a).   Trabuco Hills added four second half goals and the final score ended 14-4.

The Mustangs return to action on Saturday when they travel west to face the Sea Kings of Corona Del Mar HS. The Wolverines travel to Capo Valley HS on Friday to meet the Cougars.

Previous articleSFC Standout to Play at Wagner
Next articleSailors Get Closer to A ‘Ship
MaxLaxAll Lacrosse. All the Time.
Southern Section Boys