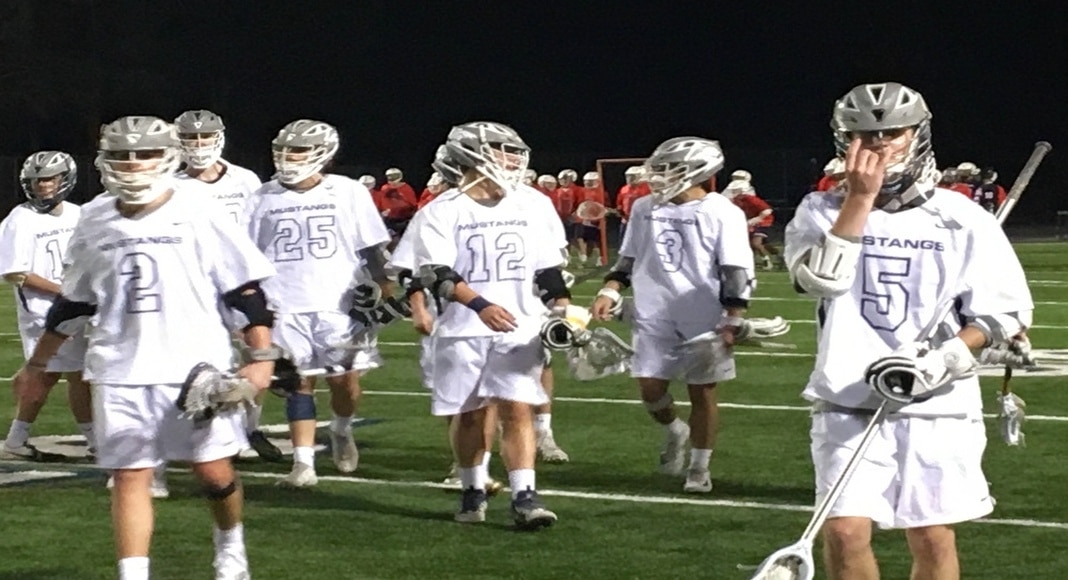 Trabuco Hills (7-1 overall 2-0 in league) hosted another out of state team on Monday when the 2-1 Class 5A Lakewood Tigers from Jefferson County Colorado came to town, where the Mustangs reigned victorious in a tight 16-14 contest.

Both teams came to play early as Trabuco’s Jared Friesen (4g, 3a) got things started with an unassisted goal from midfield. The theme for the day was for each team to trade goalsa back and forth game. Lakewood’s Woods scored three first half goals and Brunner added one. Trabuco scored three more first quarter goals with Friesen adding his second and Holden Evans (4 goals and 4 assists) and AJ Switzer (5 goals, 1 assist) knotting things up 4-4 at the end of the first quarter.

The second quarter started where the first left off when Josh Burdette answered another Brunner goal. The Mustangs and the Tigers traded goals throughout the second frame until going on a late run to go into halftime up 10-7. Colin Seedorf continued his run of outstanding games at the faceoff X going 28-35 on the night.

The third quarter started with the Mustangs man down after two penalties were called on Friesen. Lakewood capitalized on the man up opportunities and went on a little run of their own. Lakewood held a 13-12 lead with a few minutes left in the third quarter. Switzer scored Trabuco’s next two goals and the quarter ended 14-14.

Seedorf helped Trabuco earn the first possession of the fourth quarter and Burdette netted his second goal and the eventual game winner off of a nice feed from Friesen. The Mustangs regained possession off of a highlight reel worthy one handed groundball and a behind the back move by Evans.

The Mustangs dominated time of possession in the fourth quarter and received an insurance goal from Justin Paget with just under three minutes to play. The Mustangs got a big time save from Sophomore goalie Cooper Gatine (8 saves) on a point blank shot and that helped seal the win.

Max Wulterin showed his versatility in stepping up at LSM in the absence of regular starter Christian Wright. Jacob Carrasco and Caleb Sanders shared the duties of replacing Wulterin on defense.

The Tigers have the day off to enjoy Disneyland tomorrow and return to action at Santa Margarita on Wednesday night. The Mustangs travel south tonight for their second game in as many nights against San Clemente. The winner will have sole possession of first place in the South Coast League as both teams are 2-0.