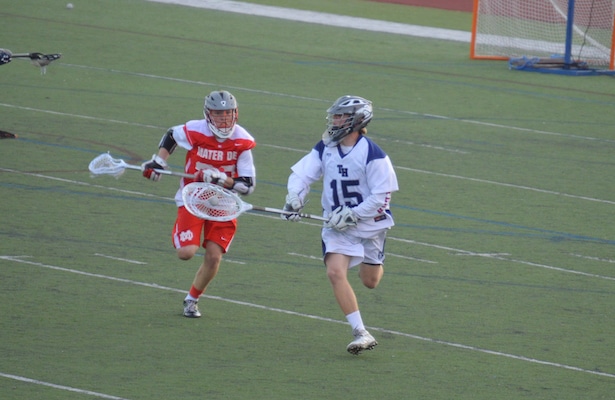 The Trabuco Hills Mustangs hosted the Mater Dei Monarchs in a non-league contest on Tuesday night.  Both teams entered the game looking to reverse recent fortunes. The Mustangs had lost their previous two games, and the Monarchs were looking to end a four-game skid. Trabuco Hills came out on top, leading wire to wire en route to a 14-4 victory.

The Mustangs jumped out to a 1-0 lead at the 10 minute mark of the first quarter when Billy Barron fed Jason Kauo for a goal. Barron followed with another assist to Holden Evans a minute later. The Monarchs momentarily stopped the Mustangs momentum when Nick Sando scored on a nice individual effort. The Mustangs answered with with a goal from Barron off an assist from Wyatt Koudelka. The first quarter ended with the Mustangs leading 3-1.

The second quarter proved this was destined to be Barron’s night on the score sheet when he fed Holden Evans from X and Evans finished with a highlight reel face dodge and top shelf goal. Howie Gundy kept things rolling for the Mustangs on the ensuing face off with a clean win, an outlet pass to Koudelka and a finish by Barron. Mater Dei goalie Trent Kriha kept the Monarchs in the game with several nice saves, including a point blank stop on a Mustang shot. The Mustangs capped off the second quarter with goals from both Harrison and Holden Evans to head into halftime ahead 7-1.

The Mustangs were anchored again by some stellar net minding from Senior Nick Wilson, who continued his excellent play of late. Wilson was protected throughout the night by defenders Patrick Zanio and Jason Rivera who each netted several deflections and take ways. The third quarter saw the Monarchs Senior attack Jack Southron net two unassisted goals on great individual efforts. The Mustangs were not to be denied on this night, ending the third quarter with another goal from Koudelka and a comfortable 8-3 lead.

The fourth quarter began with a nice clear by the Mustangs’ Jake Lansner, which lead to a goal by Koudelka.  Harrison Evans added two additional goals, one of which was a behind the back gem off a rebound loose in the crease. The Monarchs Jack Southron finished off a hat trick for the night, only to see Barron, John Kauo, and Scott Barger find the back of the net as well to bring the final score to 14-4.

The Mustangs return to action on Friday when they travel to the northern part of the county to take on the Yorba Linda Mustangs. The Monarchs return to Trinity League action on Thursday when they face the Eagles of Santa Margarita.