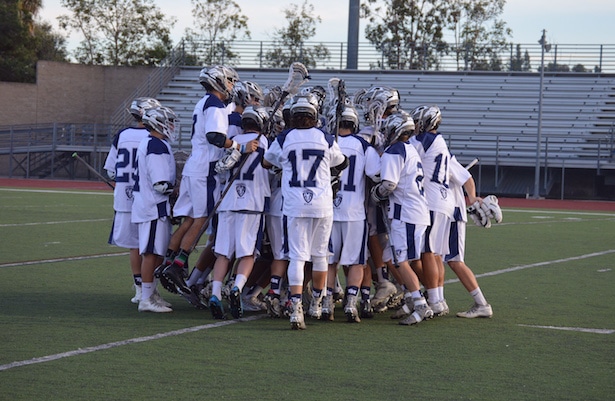 On Thursday, March 10th the #6 ranked Trabuco Hills Mustangs squared off with the #13 ranked Servite Friars for the Mustangs’ home opener. The Mustangs were looking to rebound from a one point heartbreaking loss to cross-town rival Santa Margarita this past Saturday. The Friars brought a 2-1 record into the match up after their first loss to Great Oak out of Temecula.

The second quarter was dominated by the Mustangs and the brothers Kauo. Older brother John Kauo got on the score sheet with an unassisted tally, followed by Koudelka’s second goal and Jason Kauo’s second as well. The three unanswered goals allowed the Mustangs to close out the half with momentum and a 7-1 lead.

The second half started with Trabuco Hills freshmen attack Holden Evans (no. 5, pictured below) scoring an unassisted goal, which was answered by Servite’s Kyle Cartwright, with an assist from Chase Anderson. Trabuco Hills continued to dictate the pace of the game and closed out the third quarter with goals from John Kauo assisted by Barron and Harrison Evans. The Friars Stephen Shatyinski added a goal off of an assist by Anderson and the third quarter came to a close with Trabuco Hills leading 10-3.

The Mustangs were lead on defense by LSM Scott Barger (no. 17, pictured below) who turned in another stellar performance with four ground balls and seven caused turnovers, Jason Rivera, and goalie Nick Wilson. The fourth quarter was more of a back and forth affair with Servite getting goals from Cartwright, Jack Brennan, and Anderson.   Trabuco Hills finished off the game with an unassisted goal by Barron and two more from Harrison Evans to reach the final score of 13-6.. The two fourth quarter goals from Harrison Evans capped off his second straight five goal game to lead all Mustangs in points for the season.