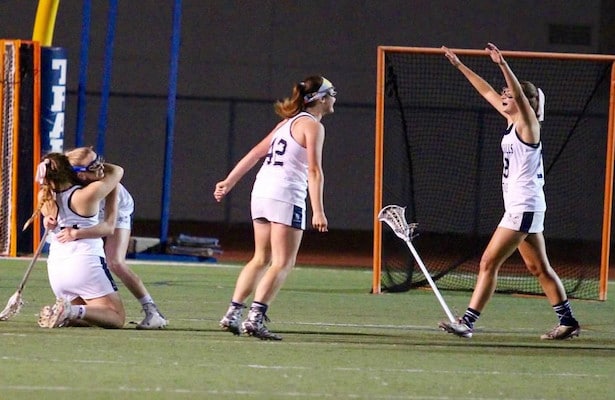 The Trabuco Hills girls’ lacrosse team  toppled Foothill, 8-7, on Tuesday night at Trabuco Stadium, the Mustang program’s first victory over the perennial powerhouse Knights in 10 tries over the past decade.

Trabuco came out strong against the defending Orange County/Southern Section champions to earn a 6-5 lead at half on three goals from Juliet Mooney; two from Kendall Derbyshire and one from Sydney Rauch. But the two teams tussled all second half with little scoring success.

Key for the Mustangs was winning all five draw controls after the break. Another goal from Mooney, her fourth in the game, and one from Hennessey Evans equaled the Knights’ second-half scoring and was good enough for the win.

Foothill coach Kate Hick commended the Mustangs on the victory “Trabuco played great. It was a good win for them”

Thanks to Trabuco Hills Girls Lacrosse for their contribution to this story.