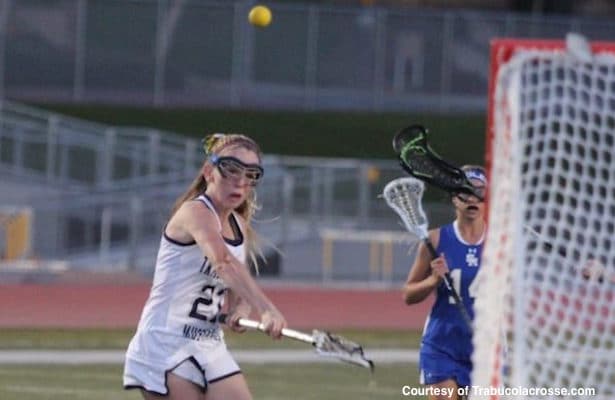 Trabuco opened up a quick, four-goal lead to start the game and led at halftime, 6-3. The Mustangs kept Santa Margarita chasing them the entire second half of the US Lacrosse SouthernSection Southern Division playoff match.

Key to the game was goalie Ashley Bell, who had 20 saves on the night. Goal scorers were Hennessey Evans (5), Kendall Derbyshire (4), Juliet Mooney (4).

The Mustangs used three girls on draw to combat’s Santa Margarita’s skill in the circle — Shannon Smith, Sydney Rauch and Kody Shelton — and managed six draw controls on the night, led by two each by Derbyshire and Evans.

Next up is a quarterfinal rematch against #3 seed Foothill. Trabuco beat the Knights, 8-7, earlier this season. Foothill beat San Clemente, 11-3, to advance to Thursday’s night’s game. (Trabuco beats San Clemente twice in 2016 by a combined 30-15 score!)

Notes: The win marked the Mustangs’ 15th of the season, only 2014’s 17-win season had more victories … Only three Orange County teams have won playoffs games each of the last four years: Mater Dei, Beckman .. and TRABUCO! The Mustangs have made the playoffs in all 10 of their seasons!