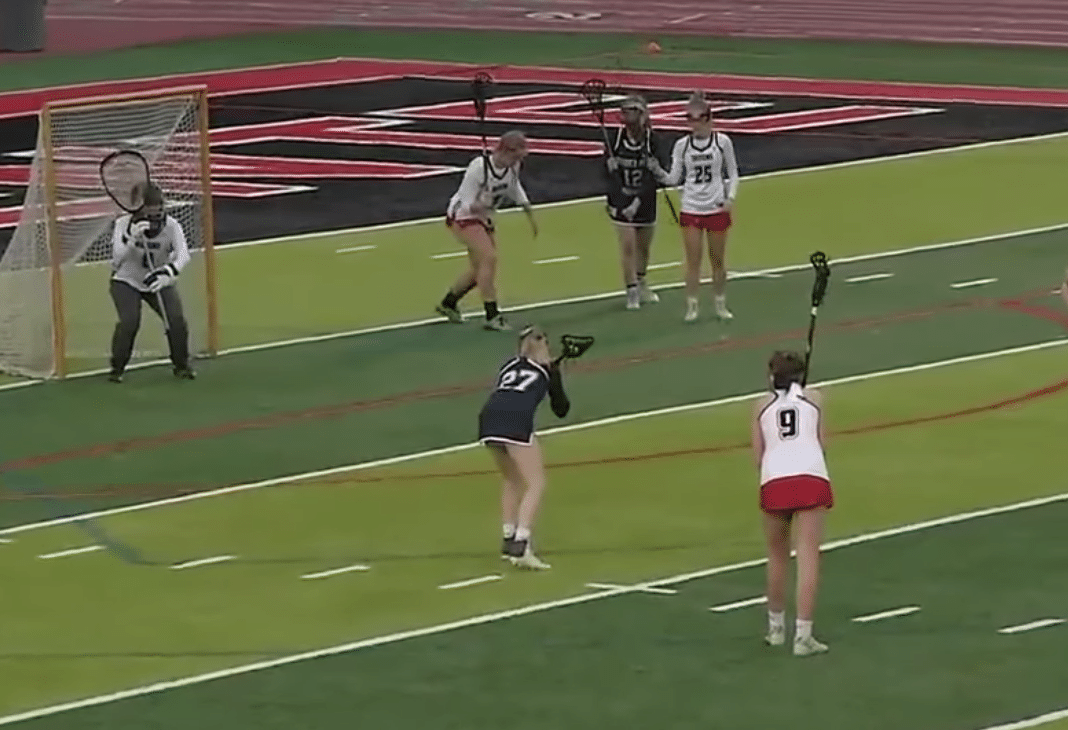 San Clemente, March 2 – In the nascent stages of this 2018 season, Trabuco Hills and San Clemente renewed their South Coast League rivalry with a cold-weather matchup under the Friday night lights.  In 2017, SC was the only team to upset Trabuco in the regular season, and the Mustangs were eager to set the record straight.

Off the opening draw, Triton superstar Shay Hefft scooped the loose ball, pressed the fast break, and fed a streaking Delainey Iles for the quick strike and the 1-0 lead after only ten seconds.  The home team wound not find the back of the cage again for nearly twenty minutes.

Trabuco earned possession off the ensuing draw, but after settling the offense, fed into a nifty interception by Catherine Yubeta.  From here, play moved back and forth, with some more defensive knockdowns on the Triton side and a hard ride from the Mustangs that forced errors.  When breaking through the ride, San Clemente pressed the cage hard on the transition, while Trabuco regularly fell into their settled offense—aiming to pick apart the signature SC zone.

Trabuco’s Ieneke Jimenez opened the scoring for the visitors, with a drive through a pick and a shot to even up the game.  From here, the Mustangs dominated the first half, earning draw after draw and keeping the ball out of their defensive end.  Just before the 20-minute mark, Trabuco’s Hennessey Evans drove through a triple team and laid the ball in for the 2-1 lead.  The Triton defense stood strong, earning knockdowns and interceptions as the Mustangs continued their relentless attack; and goalie Kennedy Kingsmill came up with a great low save off a lethal Evans free position—the first of several big saves she would come up with to keep her squad in the game.

Despite earning big defensive stops, the San Clemente clear often came up short against a swarming Mustang ride that earned a number of key early turnovers.  Trabuco’s Audie Shutler was the beneficiary of one of these team turnovers as she took the ball from midfield in the unsettled play and pocketed the shot for the 3-1 lead…and prompted a timeout from SC coach Josh Cain.  The timeout, however, was to no avail.  Trabuco continued to dominate the draw, the ride, and the groundball game.  With a goal from Jimenez (off a draw-and-dump from Evans) and two from Evans, the visitors took the 6-1 lead.

Jessica De Collibus stopped the bleeding for her Tritons by converting a strong free position at the 5:42 mark.  But the Mustangs’ Evans answered on the next possession with a quick move that left another three defenders on her back side as she buried a near-unstoppable shot.  San Clemente’s Hefft responded with a remarkable defensive interception, which she cleared through midfield herself but lost the pass to a flagging Trabuco stick; in the ensuing unsettled play, Triton Paige Campbell scooped the loose ball, fed to Tess Jonas, who saw an opportunistic cut from Annie Garcia, who took the perfect feed and converted beautifully.

In the final forty-five seconds of the half, Trabuco’s Juliet Mooney netted two daggers: a nasty 8M free position shot and a standing double-fake on top of the crease off a free position feed from Evans.

San Clemente made the necessary adjustments, coming out of the second half gate with three goals in the first five minutes, along with the two successive draw wins.  The first came from Hefft, who faced up a solo defender and made a quick, deceptive bounce shot.  The second belonged to Jonas, who made a strong crease roll, got a step on her defender, and wound up for the shot through the crashing double team.  The last was from Iles, who recognized a hole in the crease defense, attacked, got a step on her defender and popped off with a strong low shot.

With Trabuco’s lead cut to three and twenty minutes to go, it felt like anyone’s game.

But Trabuco, behind the smart play of its entire offensive unit—well versed in game management by coach Scott Leong won the next possession and slowed everything down.  A series of possessions lasting minutes apiece, with strong team defense and on-ball pressure from Shutler in front of their own cage, allowed the Mustangs to milk the clock and wind down the Triton momentum.  With under eight minutes to go, Trabuco’s Jimenez ripped a strong shot through two Triton sticks off a feed from Mooney; she added another off a winding drive that gave her team a 11-6 lead with under three to go.

As the San Clemente defense was stretched, Trabuco’s Kristen Rosenberg and Jimenez added late goals to put the 13-6 victory on ice.