Get To Know The Evans Trio 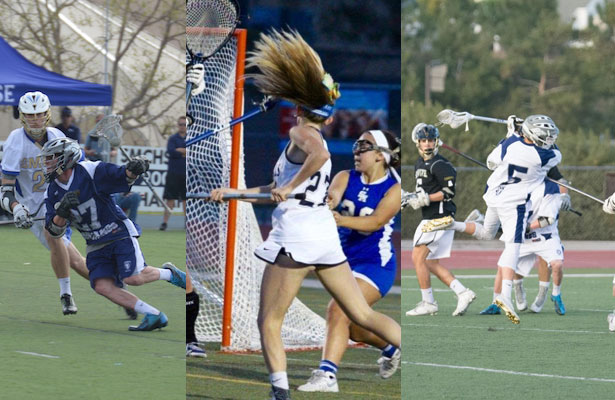 Like the game itself, until recently the “Lacrosse Family” has been a tradition limited to the lacrosse hotbeds.   We’ve all heard of the Gaits, the Powells, the Stanwicks, and the Thompsons.  Although the West has yet to produce such family dynasties, the time is coming. More and more,  lacrosse is becoming a family affair here in the OC and throughout the West.  We’ve particularly noticed a rise in the number of families that have brothers and sisters sharing their love of the game, and thought it would be fun to introduce our readers to some of these families. Today we introduce you to the Trabuco Trio of  Harrison, Hennessey, and Holden Evans.

Harrison, the oldest sibling just graduated from Trabuco Hills where he finished his career as the first lacrosse All American in the school’s history.  He will play for Colorado Mesa next season.  Harrison says he is getting ready for the next level by “going to Athletes Choice almost every day to do speed training and weight lifting. I also do shooting practice and wall-ball in my back yard every day.”

Hennessey, a rising sophomore on the Mustangs girls’ lacrosse team, got into lacrosse “when Harrison wanted me try it.  I had always messed around with my brothers in the back yard but had never played and both of them talked me into trying it in first grade.  Since my first game I was hooked.”  Seems like Hennessey was wise to listen to her brothers.  She finished her freshman season with 78 goals, 13 assists, 36 groundballs.  That was good enough to earn 1st Team All League and 2nd Team All County honors.  Hennesey will play on the  Under Armour West Girls’ Command Team in July.

Holden is also a rising sophomore at Trabuco Hills.  Despite the high bar set by his siblings, Holden had no trouble keeping up.  Holden finished his freshman season with 39 goals, 13 assists, 39 groundballs and 2nd Team All League honors.  He will play to play on the Under Armour West Boys’ Command Team in July.  Like his big brother, Holden hope to play at the next level, saying “it has been my dream since I started playing lacrosse and started watching the college games on TV.  I would love to play D1 lacrosse at Loyola.”

So you get the picture.  The Evans have more than just the first initial H in common. These guys and this gal can play, and at least part of their success stems from feeding off one another.  How do they motivate one another?  Well, it appears to be a combination of sibling support and sibling rivalry.

“For Harrison, I love watching him go 100% all the time even when his team is down and there is no chance of coming back” Holden explained, “For Hennessey, I enjoy watching her go hard to the cage every time and not be afraid.”  Holden added that playing with his brother brought out the best in them because “it was always competitive between us because we always fought over who did better in each game.”

Although Harrison says he prefers watch watching Holden play “because he’s so shifty and I love to see him break kids ankles every time he dodges,”  Hennessey’s culinary skills help her get the nod on the homefront.  Harrison says “My sister is the better sibling because she helps me out with everything and makes me food sometimes.’

If the Evans were to have a one-on-one tournament, who would win?  Hennessey and Holden both give Harrison the advantage.  Hennesey says that Harrsion would be beat Holden “because he is a little aggressive and wouldn’t ever want Holden to have bragging rights.”   Holden observes that Harrison “is a bit on the girly side when on the field.”,  so that would help him in a game against Hennessey.