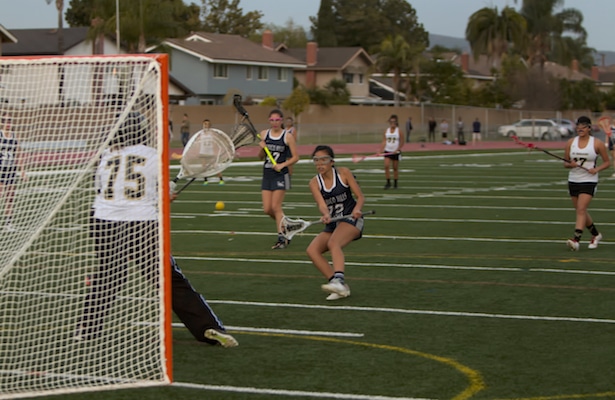 The Newport Harbor girls’ lacrosse team christened its home-away-from-home at Estancia High School against rival Trabuco Hills on Friday. Over the last two years, Trabuco has squeaked by Newport by an
average of two goals, and Friday’s game followed the trend. The Mustangs jumped out to a 7-4 halftime lead and then hung to capture the 8-6 victory.

Hennessey Evans scored three goals, Kendall Derbyshire had two goals, and Juliet Mooney and Gabi Bitting added one each in the half for the Mustangs. Goalie Ashley Bell kept Newport at bay with three saves. The Sailors were led by a strong first half from goalie Hannah Sanders, two goals from captain Katie Hendrix, and one goal apiece from captain Rylie Siegfried, and Sarah Farley.

The second half was a low-scoring affair, as Newport’s defensive corps (anchored by seniors Jordan Rausch, Sophia Riggan, and Maxine Aiello) stepped up for some big-time team-D. Behind two goals from Siegfried – one off a mad-dog drive from a beautiful assist by a dodging Hendrix – Newport was able to win the half 2-1, but it was not enough, as Trabuco notched another victory, 8-6. Sydney Rauch scored the Mustangs’ only goal of the second half and Bell made five more saves.