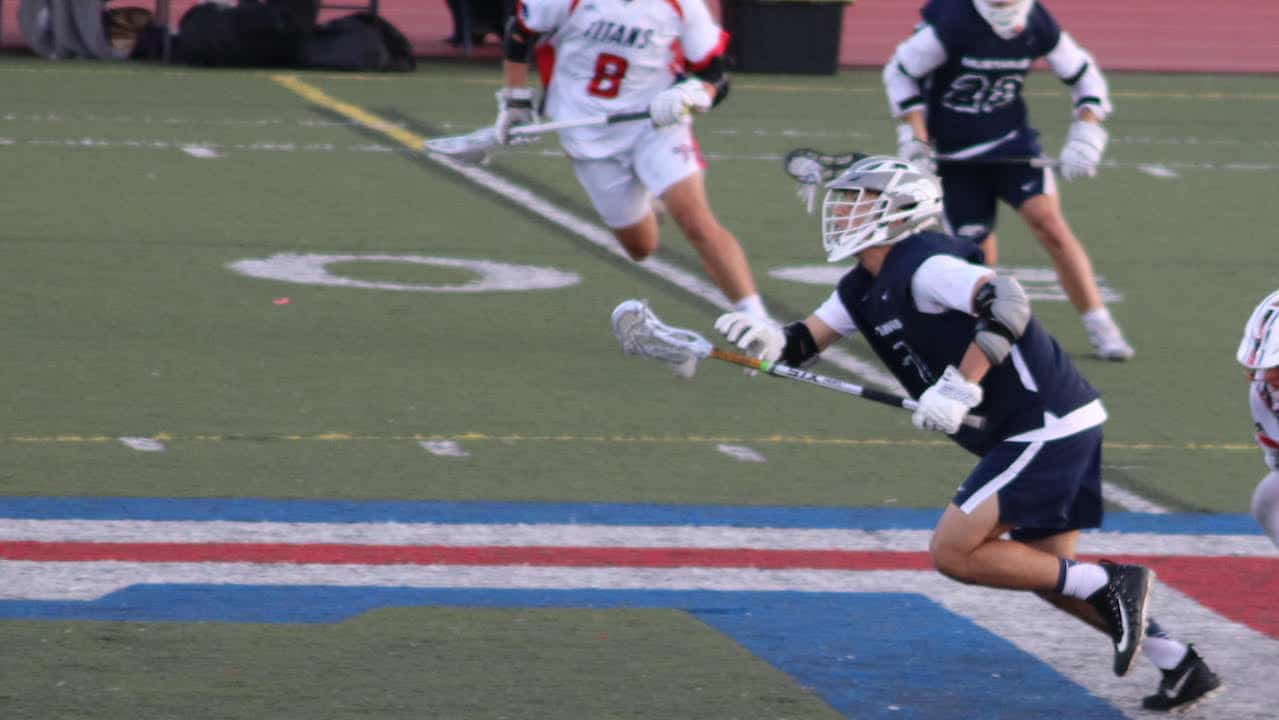 The Trabuco Hills Mustangs claimed a decisive 16-6 win over the Tesoro Titans  on Wednesday night in the opening game of South Coast League play. The Mustangs earned their second win over a Top 10 team this season and remain undefeated.  Tesoro falls to 4-1 and will now have to play catchup in the South Coast League race.

The Mustangs came into the game with a chip on their shoulder after losing twice to the Titans last year.  The cross-town rivalry, rooted in the 241 Classic and reborn this year through South Coast League play always brings out the best in both teams as many of the participants grew up playing with or against each other in the OCLA and on the summer club circuit.

The Mustangs jumped all over the Titans early thanks to the play of FOGO Colin Seedorf.  Seedorf won 21 of 25 faceoffs on the night and helped the Mustangs dominate time of possession.

The Mustangs made the most of their extra possessions in the first quarter and jumped out to an early 6-1 lead on four goals from Holden Evans and a goal each from Miles Santos and AJ Switzer.  The Titans Colby Lynch scored off of a nice assist from Cole Pollard.

Trabuco ended the half up by a score of 8-4.  They continued the trend of finishing games with a strong second half by outscoring the Titans 8-2 for the remainder of the game.

The Mustangs were backed by a solid performance by red-hot sophomore Cooper Gatine who had at least 12 saves on the night.  Gatine teamed up with the Mustangs’ defensive unit of Max Wulterin, Logan Angel, Hunter Teston, Justin Paget, Christian Wright and Andrew Boskovich to hold the Titans to 12 goals less than their season.

Gatine has now faced two Top 10 teams in Tesoro and Santa Margarita and has allowed just 13 goals in those two games.

D-Pole Max Wulterin drew the tough assignment of trying to contain Carson Spooner, the reigning SCL Player of the Year.Wulterin was stuck to Spooner all night long, holding him to one goal and no assists.  Angel and Teston were responsible for several takeaways and successful clears throughout the night.

The Mustangs offense ran through a number of different options as five players had multiple goal games, Evans (6g, 2a), Switzer (4g, 2a), Jared Friesen (2g, 2a) Josh Burdette (2g, 1a), and Miles Santos (2g).

Lynch had two goals, Luke Molinari had two, Cole Pollard and Spooner had one each for the Titans. Goalie Lucas Zelaya was impressive in a busy night between the pipes and helped to keep the game from getting out of hand.

The Mustangs finish off the week with their third game against a top 10 opponent when they travel to Anaheim to face the #10 ranked Servite Friars on Saturday at 11am.