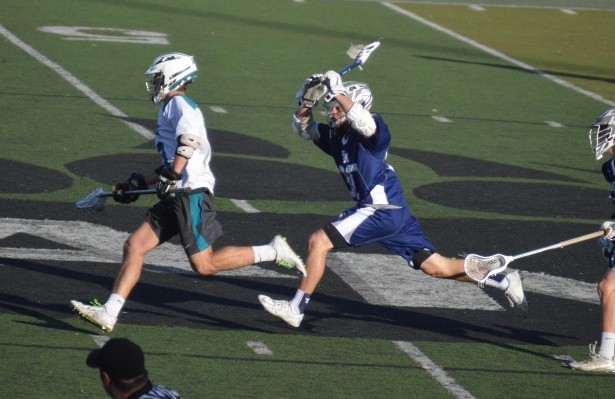 Aliso Niguel’s Tanner Clarke got the scoring started for the Wolverines on a nice goal off a pass from Sam Chassey.  The Mustangs evened the score when John Kauo fed Freshmen Holden Evans on the wing for a nice face dodge and finish in the crease.  The Mustangs celebration was cut short when they were issued a 3 minute non-releaseable penalty for an illegal stick.  The Mustangs defense stayed strong and was able to kill the penalty.  The Mustangs regained possession and capitalized when Holden Evans netted his second goal from the top of the crease with an assist from Billy Barron.  The first half ended with the Mustangs ahead 2-1.

The Mustangs Jake Lansner controlled the face off X winning 10 out of 12 battles throughout the night.  The extra possessions helped the Mustangs control possession in the second half and move toward their first league win.  John Kauo scored the first of back to back 3rd quarter goals when he corralled the 3rd rebound inside the crease and buried the ball in the back of the net.  John Kauo netted his second goal a few minutes later when he received a pass from Barron and buried the shot.  Barron added a goal to his two assists on a man up set with an assist from Wyatt Koudelka.  The Wolverines Garrett Hoang added a goal on a fantastic individual effort and Jake Lombardo scored with an assist from Aaron White.  John Kauo steadied the Mustangs when he capped off his 3rd quarter hat trick with a underhand blast from just inside the restraining box. Kauo’s shot made its way through two Wolverines defenders and found the goalie’s five hole as time expired to end the third quarter 6-3.

The fourth quarter was a defensive battle as both teams traded possessions.  Mustangs’ goalie Nick Wilson had a stellar night with 9 saves and a .750% save percentage.  Wilson was protected all evening by his defensemen Jason Rivera, Jonathan Salgado, McEnally and Patrick Zanio.  The Mustangs ended the scoring when Holden Evans finished off his hat trick after receiving a beautiful pass from Koudelka.  The Mustangs secured their first South Coast League victory with the 7-3 final.

The Mustangs return to South Coast League action at Capistrano Valley on Thursday.  The Wolverines also return to action on Thursday when they host the Tartans from St. Margaret’s.