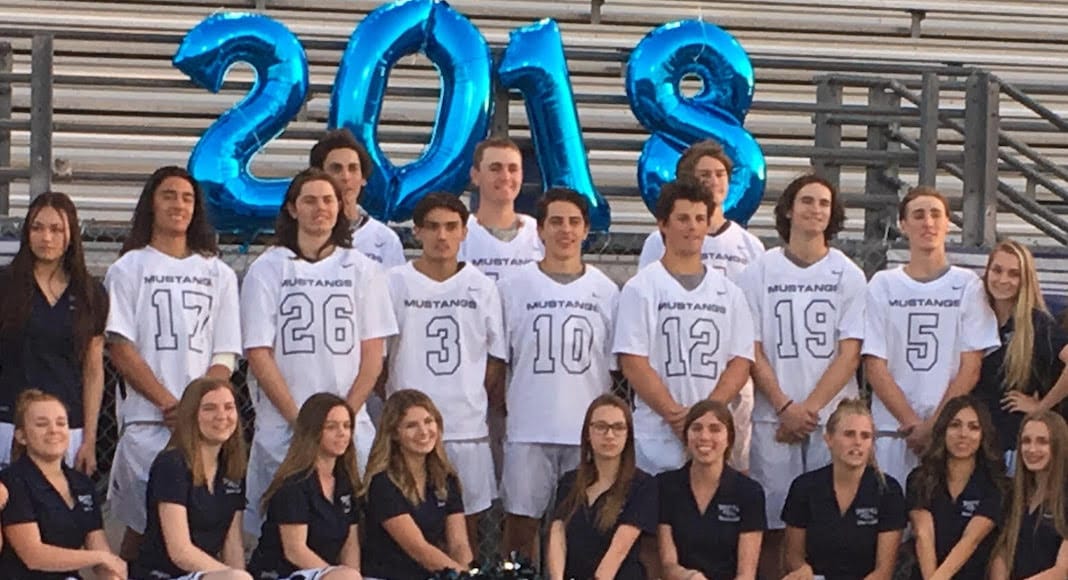 The Trabuco Hills Mustangs hosted the Aliso Niguel Wolverines in a South Coast League game on Tuesday night. The Mustangs were celebrating 10 special players on Senior Night. Many of the Seniors have been friends or played together since early on in elementary school. They have truly made an impact and set a standard for the program moving forward.
The senior class is highlighted by captains Tyler Payne, Andy Alvarez, Will Mortenson, and Jason Kauo.  Garret Redwine, Griffin Caron, Chandler Beeson, Jake Wathen, Jake Fox, and Jonathon Day round out the 10 man class. All 10 players had an impact in the game against the Wolverines.  Payne had two goals and Wathen netted a hat trick on a special night.
The Mustangs were a step ahead of the Wolverines on offense all night long.  The Mustangs Junior class was not to be outdone with  Holden Evans (7 goals), AJ Switzer (5g) and Jared Friesen (3g) scoring in a variety of ways to pace the Mustangs to a 21-6 victory. Goalies Chris DeMarco and Cooper Gatine split duty on the night and stymied the Wolverine’s offense. Trabuco Hills controlled possession throughout the night with FOGO’s Jonathon Day and Colin Seedorf dominating faceoffs.
The night truly belonged to Trabuco Hills as they maintained control of their lead in the South Coast League headed into a showdown with the #3 ranked Tesoro Titans on the road this Saturday.
LSM Brendan Schiller and attackmen Carson Parembe were standouts for the Wolverines.