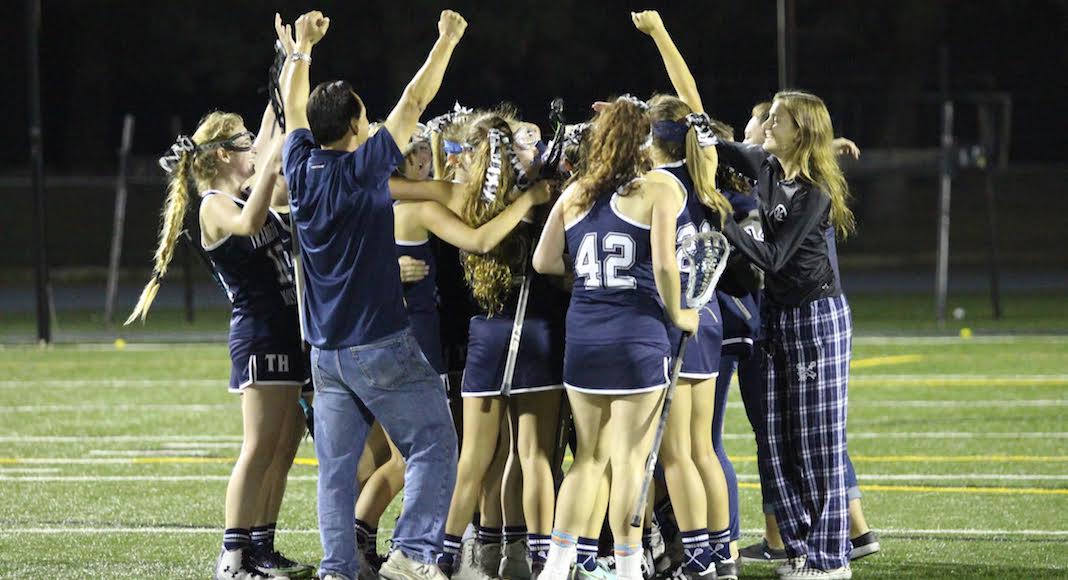 By the time the final horn sounded on Thursday’s fourth quarterfinal matchup, No. 4 Santa Margarita was four players down and their emergency backup goalie was getting her first action of the 2018 season. Meanwhile, No. 5 Trabuco Hills spread their second-half scoring around and came back from four down to earn the first upset of the 2018 OC Championship Tournament.

The teams opened the game by going back and forth for the first five goals, with Santa Margarita drawing first blood and building the 3-2 lead. Just after the Eagles extended the lead to two, Trabuco came back to tie the game at four.

The final ten minutes of the first belonged to te Eagles, who built a four-goal lead, 8-4. The teams were playing one another evenly, but with opposite styles. Trabuco was slow and methodical on offense, possessing the ball and drawing the defense out before attacking, relying primarily on their top goal-scorer, junior Hennessey Evans, who netted three of their first four goals and finished with five on the night. The Eagles looked to the fast break, the slow break, and the first look from the set for a series of quick strikes. They spread scoring through five different players, with senior Aidan Pike earning the hat trick along the way.

Meanwhile, Santa Margarita goalie Victoria Hoffman made all the routine stops and stole goals on a number of monster saves—three in the first half to help her team build the lead, and three in the second to keep them in the game down to the final minutes.

After a late goal from Trabuco junior Ieneke Jimenez, the halftime score was 8-5, Santa Margarita.

The Mustangs came out of the second half gate at a full sprint, as they scored the first three and tied the game at eight. While Hennessey Evans opened scoring and history would suggest she would take over the game at this point, Trabuco’s final six goals would ultimately come from five different players. Still, Santa Margarita bounced back, answering with two more from Aiden Pike to extend the lead, 10-8.

With thirteen minutes to go, the wheels fell off for Santa Margarita, as they collected four yellow cards in a span of three minutes—at least two of which were for repeated dangerous fouls against Evans. Evans was momentarily forced out of the game on the last of these hits. Trabuco made good on the two-player advantage to narrow their deficit to one. But with under ten to go, the Eagles gained possession, moved it into the offensive end, and went into the stall, 5v7.

They held the ball long enough to kill the penalties, but still had to play down, 7v6, for earning four yellows. Trabuco earned a turnover and, with just over five minutes to go, got to the cage and shot. But Hoffman made one of her miraculous saves and started running the ball up the field; at the restraining line, she made a hard cut and went down with an injury. Senior defender Ava Steensland got the call, and after a short warm-up, was in the cage for the home team.

A minute later, Trabuco earned a free position, which senior Kristen Rosenberg converted to tie the game. Santa Margarita scooped the ensuing draw and went back into the stall, apparently to play for the final shot. But Sidney Ruiz earned a free position from a juicy angle with just under two minutes to go: The shot was hard and low, Trabuco goalie Chiara Reniero made a blindingly fast move and got a piece of the ball—which skipped past her and hit the far pipe, bounced back across the face of the goal, spun on the turf, and was collected for the clear.

Fittingly, Trabuco’s Evans took the ball on the clear, went coast to coast, and ripped the transition shot to take her team’s first lead of the night and send them into the OC Semifinal for the first time ever. In the final seconds of the game, Trabuco scored one last tally.

For Santa Margarita, Ruiz scored one, Madeleine Bush scored one, Katelyn Murphy netted one, Caylee Harrison had one, and Pike finished with five. Beyond Evans’ five, Trabuco sealed the victory with goals from senior Juliet Mooney, sophomore Morgan Yee, and two each from Rosenberg and Jimenez.

Trabuco will face #1 St. Margaret’s in the OC Semifinal.