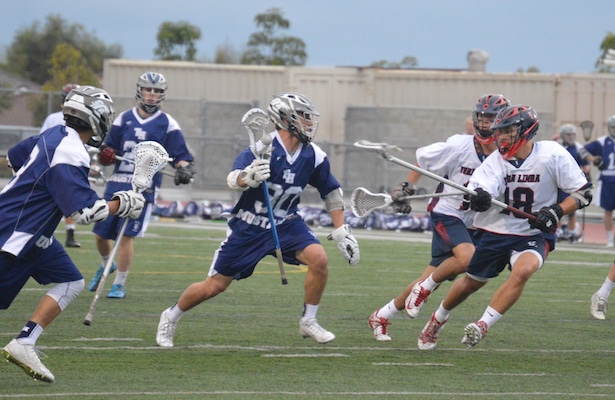 Trabuco Hills traveled to Yorba Linda for the battle of the Mustangs. The game began as rain clouds loomed in the distance. Trabuco Hills got things started early when senior attack Billy Barron (1g, 5a 6pts) continued his hot streak of late with a beautiful assist from behind the net to a cutting Jason Kauo (4g; no. 30 pictured above). Barron has been filling up the stat sheet from behind the net lately and is sure to garner a look for offensive player of the week honors.

Trabuco Hills followed with a face off win from Jake Lansner (61% face off) who fed LSM Scott Barger (1g, 7gb) up top. Barger followed with a face dodge and a bounce shot from 15 yards out for the 2-0 lead. Yorba Linda got themselves right back into the game when Andrew Flanders scored to bring the north county Mustangs within 1. Trabuco Hills Freshmen Holden Evans (2g, 1a) added his name to the stat sheet when he scored on a pass from Barron to end the first quarters its Trabuco Hills up 3-1.

Harrison Evans (1g) finished a dodge with a left handed goal to start what would be a very productive second quarter for Trabuco Hills. The goals came fast in the second quarter with John Kauo (2g), Jason Kauo, and Holden Evans all adding goals to put the TH Mustangs ahead 8-1 heading into half time. The goals were coming almost as fast as the rain clouds that soon opened up into a steady downpour.

Yorba Linda started the second half with a highlight reel worthy face dodge and “Canadian” finish from Christian Finke that brought the hometown crowd to its feet. Finke’s goal was one of 3 blemishes on goalie Nick Wilson’s stat line to continue his hot streak of late as he finished the night with an 81% save percentage. Wilson was supported again by stellar defense from Jonathan Salgado, Josh McEnally and Jason Rivera who stymied the Yorba Linda offense all night long.

Trabuco’s Mason Morris (1g) scored on a nice individual effort, only to be upstaged by Holden Evans who stole an attempted outlet pass from Yorba Linda’s goalie and buried a goal from 40 yards out into an empty net. Jason Kauo and Barron followed with two more goals, only to see Jakob Timmins stop the onslaught with a nice goal to bring the score to 12-2. Trabuco Hills Freshmen Jared Friesen (1a) came away with a loose ball after a wild scrum and fed fellow Freshmen AJ Switzer (1g) for their first varsity points. The wet and wild game ended with a final score of 13-3 in favor of the South County Mustangs.