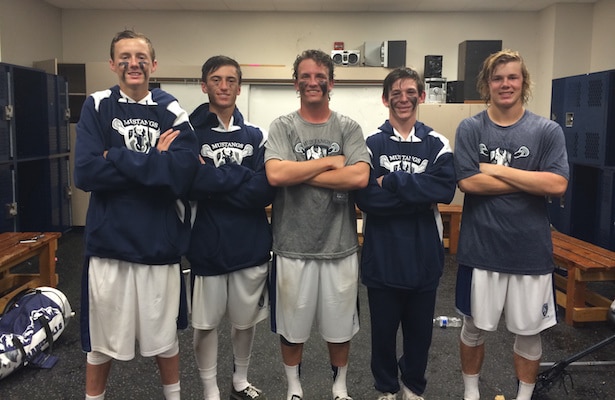 An athletic group of four juniors and a senior were named as captain for the 2015 Trabuco Hills High School boys’ lacrosse team.

Scott Barger – Junior – LSM / Defense
Barger is a transfer from J Serra Catholic High School where he started as a sophomore and committed to Towson University. Barger will add depth and more importantly leadership to the Mustang defense.

Billy Barron – Junior – Attack
Barron is a second year starter who was named Offensive MVP on JV as a freshman, and will be an integral part of Trabuco’s offense. Billy is a true field general out there always talking and directing traffic.

Harrison Evans – Junior – Midfield
Evans, a second team all league performer last year, is a third year starter and second year captain. The athletic two-way midfielder is the total package. He will score from anywhere on the field, fills in on face offs and is just as effective on the defensive side of the ball.

John Kauo – Junior – Midfield/face off
Kauo is a second year starter who can score and had a 60% success rate on face offs last year. John will bring even more firepower to the offense this year as he has stepped up his offensive game over the off season. John was bestowed the “Victory with Honor” award on JV as a freshman.

Jake Marthens – Senior – Attack
Marthens, another second team all league player, is a fourth year starter and second year captain. Jake is a lefty with impressive quickness and seems to score at will. Jake is exciting to watch and is the type of player that will put the team on his back and get it done.