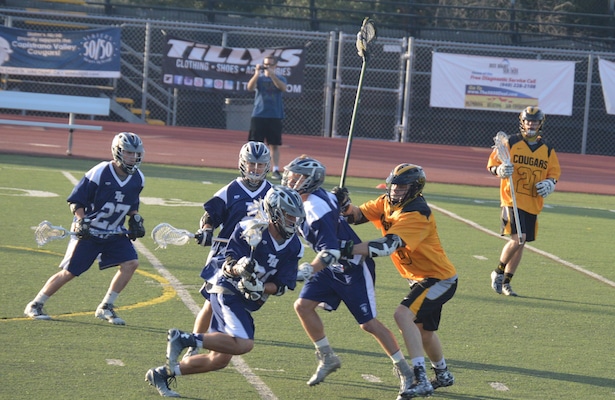 The Cougars of Capo Valley hosted the Mustangs of Trabuco Hills in a South Coast league showdown on Tuesday night. The Cougars, determined to show that  they can run with the big dogs of the South Coast League, drew first blood on an unassisted goal from Cameron Lopez to open the contest.   Andrew Blume (3g, 2a) answered for Trabuco with the only other goal of the first quarter to end the first stanza with the score tied at 1-1.

The second quarter belonged to the Mustangs as face off specialist Howie Gundy (15-3) controlled the ball and gave Trabuco possession for most of the quarter. Mustangs attackman Billy Barron (4g, 1a) got the Mustangs galloping with a nice top shelf rip on an EMO opportunity followed up quickly by Jason Kauo (1g, 1a) burying his unassisted look from the left side. Blume and Barron kept the second quarter rhythm going as Blume scored on a nice feed from Barron, and then returned the favor by finding Barron open on crease to make it 5-1. Trabuco’s John Kauo drilled a sweet low to high rip from the outside to give the Mustangs a 6-1 lead at halftime.

The Blume-Barron connection stayed hot after halftime with Blume once again finding Barron open, who delivered to take advantage of the EMO.  Blume then buried a nice running right hander to put the Mustangs up 8-1.   Down but not out the Cougars, put themselves back in the with three unanswered goals to close out the third quarter.  Lopez scored his second of the night, followed by Sam Slobam and then Blake Berk to make it  8-4 with 12 minutes to play.

Feeling the heat from the Cougars, Barron and  Troy Fenner added fourth quarter insurance goals to make it 10-4 in favor of the Mustangs.  Slobam who finished the night with three  goals for the Cougars added two goals in the waning minutes of the contest to tighten up the point differential and reach the final score of 10-6.

The Mustangs defense was led once again by senior Noah Cook (4 ground balls and 4 caused turnovers) Patrick Zanio (4 CTOs), Ryan John, Justin Wetmore and Jason Rivera also had outstanding performances on the defensive side of the ball.