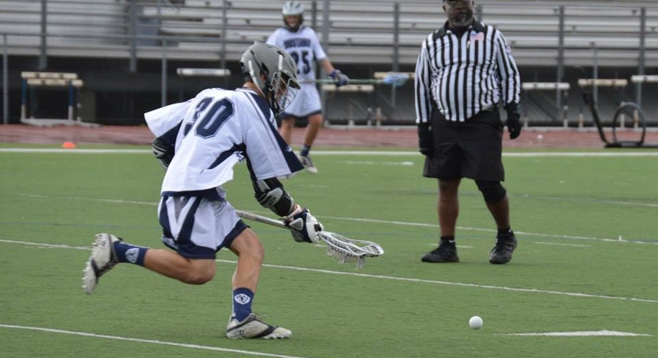 The Trabuco Hills Mustangs made key adjustments to overcome the Marina Vikings in a true tale of two halves.

Mustangs head coach Johnny Rodriguez and offensive coordinator Perry Craz for Trabuco made some halftime adjustments that led to four unanswered Mustangs goals to begin the second half that gave them a 6-3 lead. The Vikings battled back however with three unanswered goals of their own to make it a 6-6 game, and an apparent nail biter.

The Mustangs were not interested in letting the game go down to the wire though and their pre-season conditioning program looked like the diference make as they ran off seven straight goals to finish strong and defeat the Vikings 13-6. The Mustangs were once again inspired by captains Jake Marthens with 4 goals and 1 assist and Harrison Evans with 4 goals. Trabuco also recieved 2 goals each from Ben Nguyen and Wyatt Koudelka. A key to the Mustangs victory was possession, sophomore middies and face off specialists John Kauo and Jake Lansner took it to the Vikings with a 16-6 face off advantage.

Mustangs offensive coordinator Perry Craz had this to say following the win, “I am so proud of the way we stayed focused, never got down and kept the pedal to the metal.”

Marina had nice performances from senior Trevor Murphy and junior Trevor Arent, both with two goals in the game.