Torrey Pines Ranked No. 1 in the West, Van der Hyde is Player of the Week 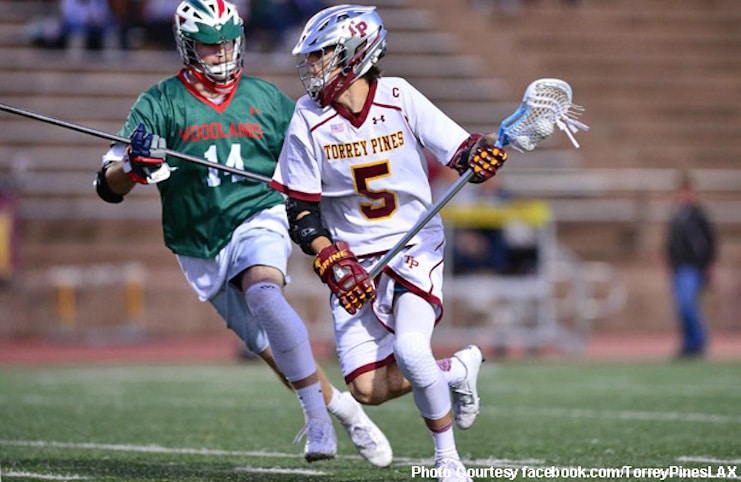 Torrey Pines recent wins over St. Ignatius and Lawrenceville (NJ) hurdled the Falcons to the top of the Nike/US Lacrosse Western Region Rankings.  The Falcons stunned St. Ignatius, the previous no. 1, 14-11 on Saturday.  Alderik Van Der Hyde’s eight-point performance (5g, 3a) earned him Player of the Week honors.

The other Southern California teams ranked in the regional top 10 are No. 4 Loyola, No. 7 Poway, and No. 9 Corona del Mar.  The following excerpts are from USLaxMagazine.com:

4. Loyola-Los Angeles (Calif.), 5-0: The Cubs beat Foothill-Santa Ana (Calif.) for the first time in program history, accounting for Foothill’s first loss of the season, 13-7, on Saturday. Loyola dominated possession with help from Aidan Hesse winning 16 of 24 on faceoffs, and Mason O’Hanlon led the offense with four goals and one assist while goalie Joe Theuer finished with 12 saves. Previous: 7

9. Corona del Mar (Calif.), 1-0: The Sea Kings were idle last week after opening with a 14-6 win over Los Alamitos (Calif.) on March 4. They resume play Tuesday against El Toro before a tilt with Foothill-Santa Ana on Saturday. Previous: 9

PLAYER OF THE WEEK

The senior attackman registered three goals and five assists to lead Torrey Pines to a 14-11 upset win over St. Ignatius Prep (Calif.), which was the top-ranked team in the West at the time. Van Der Hyde is a Middlebury College commit and a team captain.