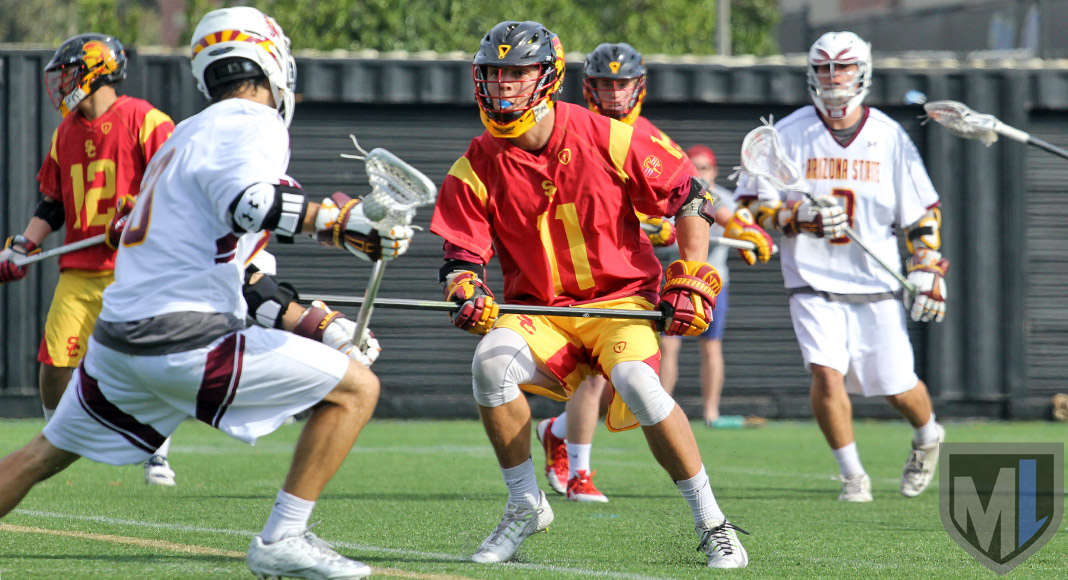 After a stellar four-year MCLA career at USC, former Torrey Pines star Peter Hollen took the unusual step of transferring to Michigan and is playing a fifth and final year of collegiate lacrosse for the NCAA D-I Wolverines.

In his senior season USC, Hollen’s ability caught the eye of the Trojans’ new head coach, Dan Moriarty. Moriarty had a connection with Michigan coach Kevin Conry and began planting the idea with Hollen about playing NCAA D-I.

“(Moriarty) always would say to me, ‘You need to go play at the next level. Why are you doing this club stuff?’,” Hollen said. “I never really took him seriously, because I was obviously trying to prepare myself to be a real human being, going to get a job. But then he picked up the phone and called Conry, and next thing I knew, I’m at Michigan.”

Hollen graduated from USC with a degree in business administration and headed to Michigan to play lacrosse and earn a social work/business hybrid degree that will turn into a certificate. Hollen’s transition from MCLA to NCAA raised some questions about how he is able to play a fifth year if the two governing bodies are supposed to count seasons equally toward eligibility.

From the moment an athlete begins attending an NCAA Division I school, they have five calendar years to play four full seasons, which is commonly referred to as the “five-year clock.” When it comes to lacrosse, both the MCLA and NCAA will start this “five-year clock” in the athlete’s first season and will count each season equally toward eligibility — but only if the athlete plays NCAA first.

In Hollen’s case, his “five-year clock” began ticking during his freshman year at USC. But since he didn’t play a season of NCAA within those four years at USC, Hollen still has a fifth and final year to play at Michigan.

It’s a complex process, to say the least, but Peter Hollen said he’s glad it worked out the way it did so that he could satisfy the perpetual itch of playing at the next level.

Hollen’s road less traveled began when he was in middle school and played for Rancho Santa Fe Legends Lacrosse under Rory Doucette and Jono Zissi. In high school, Hollen took a brief hiatus from lacrosse to play volleyball during his freshman year.

He returned to lacrosse his sophomore year, joining the Torrey Pines team under Zissi where the long-stick middie used his athletic and physical play style to earn an all-league recognition.

“Jono Zissi has done an incredible job of building a foundation of championships but then also making lacrosse as fun as it can be,” Hollen said. “It was awesome to compete at the highest level being at Torrey and being prepared to play at levels above, like NCAA. So I think I came from the best possible program I could have.”

Despite this, Hollen admitted to being more invested in his football career, where the all-CIF wide receiver/defensive back was recruited by Ivy League schools Pennsylvania and Dartmouth. Ultimately, Hollen opted to attend USC to focus on academics and because he wanted to stay in Southern California.

Peter Hollen prolonged his lacrosse career by joining USC’s MCLA team, an attractive option because it was a lot less time-consuming than an NCAA team.

“(MCLA) was club, so it was a lot less of a commitment,” Hollen said. “I still played lacrosse every day, but it wasn’t six hours a day. But I knew if I didn’t play sports in college, I didn’t just want to quit cold turkey, so I did want to play club no matter where I ended up.”

The flexible hours allowed him to devote more into the academic business clubs and classes. By the end of his MCLA career at USC, the 6-foot-2, 180-pound defenseman was named a second-team MCLA All-American, first-team all-conference and SLC defensive MVP. He collected 256 ground balls, scored 20 goals and made 11 assists in 56 games as a Trojan.

And while Hollen said he did have a wholistic experience and made some incredible friends at USC, his competitive drive had him yearning to play at the next level. After discussion with Moriarty and Coach Conry at Michigan, he made the leap.

Hollen said the NCAA is obviously much more competitive than MCLA, but he said MCLA is still a legitimate and underrated level that prepared him quite well for the transition. He said there are many other skilled players he believes could earn their spots on an NCAA roster.

With two younger brothers –- one playing at Tufts University and the other at Torrey Pines and committed to Brown –- Peter Hollen advises younger players to always have an open mind when it comes to playing sports in college.

“I think the biggest thing is just to open as many doors as possible,” Hollen said. “Maybe I did close some doors when I went to USC and closed the door on sports, but I always had that itch or that chip on my shoulder, and the advice my dad has given me has always been to try to open as many doors as possible … but overall it’s been a great experience.”

Peter Hollen made his NCAA debut on Feb. 9 in Michigan’s season opener as the Wolverines defeated Cleveland State 10-8. He then collected four ground balls and caused two turnovers in Michigan’s 17-16 loss to Drexel on Monday.