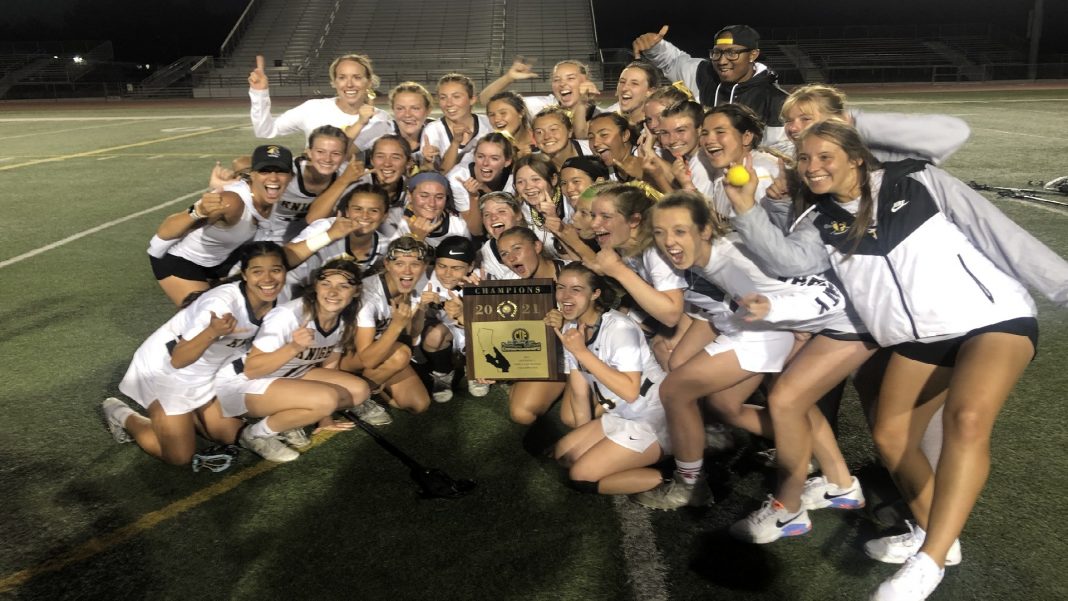 Elena Torres and Taylor Puma led the Knights with five goals each while Zoey Stephens added four goals. Torres also reached the 100-goal mark on the same night her team won on the biggest stage.

“These girls have put in the work all year, they know exactly what to do and it was play our game, play together and just play as one,” Knights coach Cristina Rodriguez said.

From the opening faceoff, Foothill meant business by scoring the first four goals of the game to give them a 4-0 lead after the first five minutes of the first half. The Panthers didn’t score until Reagan Laubner did so with almost 10 minutes gone by.

After Foothill gave up that goal, Torres scored to give herself 100+ goals in her high school career and scored to spark the first of five consecutive goals. After the five consecutive goals, the Panthers scored courtesy of Lindsay O’Toole, but the Knights scored four straight goals and eventually went up 14-2 at halftime and never looked back.

While being ahead by a comfortable margin, the Knights got some of their other players who don’t usually score into the scoring frey, such as Filbert and Armstrong. To Newbury Park’s credit, it never gave up as it kept battling until the final whistle, despite the running clock.

“They [Foothill] just outplayed us, that’s a well-oiled machine. Just to be here was a gift. Our goal of the season was to get to the CIF playoffs and we did, so next year we have bigger goals and that’s to win CIF,” Panthers coach Michelle Yarger.

Cassie Huber and O’Toole led the Panthers with two goals each while Laubner had one goal. Danielle Guyette made nine saves.

When the clock hit zero, Foothill stormed the field knowing that they had become the first CIF-SS Division 1 girls lacrosse champion and had won their first championship since 2015 in the old playoff format. Torres, one of the Foothill players on 2019’s team when it lost in the Orange County championship, said that winning CIF was special after last was cut short due to Covid.

“Losing my freshman year was really tough and getting our season cut short was even worse, but after all that happened, we just decided that we needed to work super hard and get this championship,” Torres said.

Foothill (18-0) became the first girls lacrosse team from Orange County to post an undefeated season since 2016 when Mater Dei accomplished that feature. During this season, the Knights won all but four of their games by double digits and only allowed one of their opponents to cross the 10 goal mark all season.

“It [winning CIF] means everything to me because I’ve been working my past three years on varsity for this and it’s just an accomplishment to win for everyone and all the seniors last year and for the program,” Healy, a senior captain, said.

Foothill, the Crestview League champion, began its playoff run with a 19-10 home win over JSerra in the first round and followed that up with a 17-2 road win over Newport Harbor in the quarterfinals. The Knights then defeated Redondo Union on the road 20-8 in the semifinals.

Newbury Park (15-2), the Marmonte League champion, opened its playoff journey by defeating Beckman 22-10 at home in the first round and followed that up with an 8-7 overtime victory at home over San Clemente in the quarterfinals. The Panthers then toppled Santa Margarita 14-8 in the semifinals.