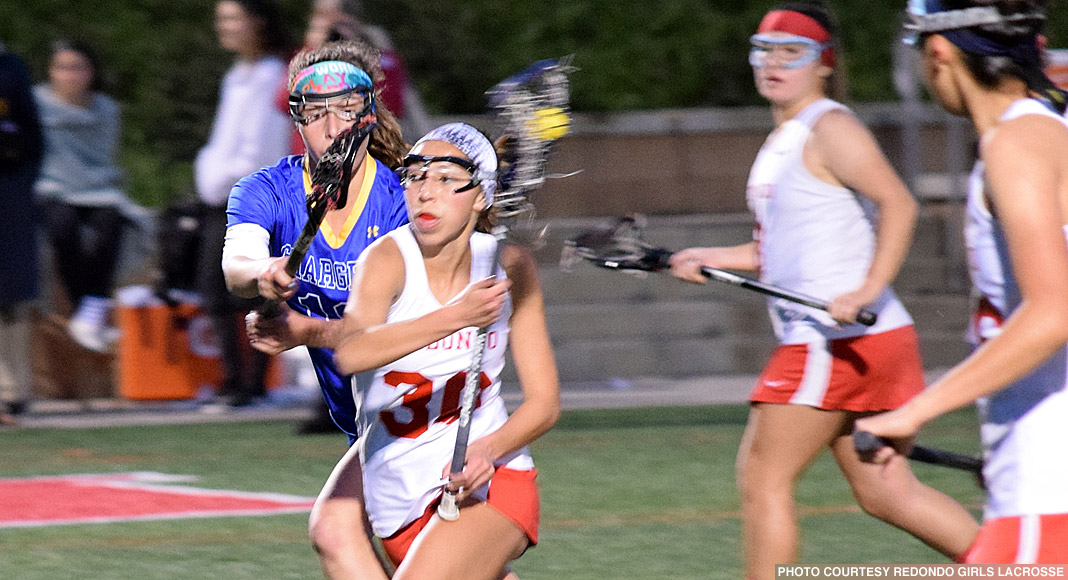 Two-time defending LA champion Redondo Union opened its 2019 season Wednesday with a 15-7 win over No. 2 Agoura in a rematch of last year’s LA title game.

In the early going, it looked as if the Chargers might be able to hang with the Sea Hawks. Agoura controlled the opening draw and had possession for five minutes with multiple shots on goal but came away empty. Redondo’s offense took over from there and scored seven consecutive goals in the next 10 minutes and never looked back. Sophomore Jordan Davis (pictured) scored three goals, and Addy Bass and Caitlin Hanniff each had two in the 7-0 spurt.

Agoura responded with two quick goals, but Redondo scored four more to lead 11-2 at the half. Bass had 4 goals, Davis 3 and Hanniff and Brooke Tokushige had 2 goals each.

Redondo scored two early goals in the second half to go up 13-2 before Agoura made a run to make the final score 15-7. Redondo coach Tom Borgia earned his 160th win (against 29 losses) at the start of his 11th season as head coach at Redondo.

Redondo boasts a balanced offense, with all seven starters capable of scoring in bunches. Bass finished with 5 goals against Agoura; Tokushige had 2 goals and an assist; Hanniff finished with 4 goals; and Davis had 3 goals and 2 assists. Marianna Gamet controlled the draw and also had 3 assists.

Over the weekend, Redondo (3-0) defeated Corona Del Mar 11-3 and Tesoro 21-2 in the LA vs. OC Shootout. Wednesday, the Sea Hawks open Bay League play at Palos Verdes. On March 2, the Sea Kings beat the Sea Hawks to win the Rose Bowl Jamboree tournament.