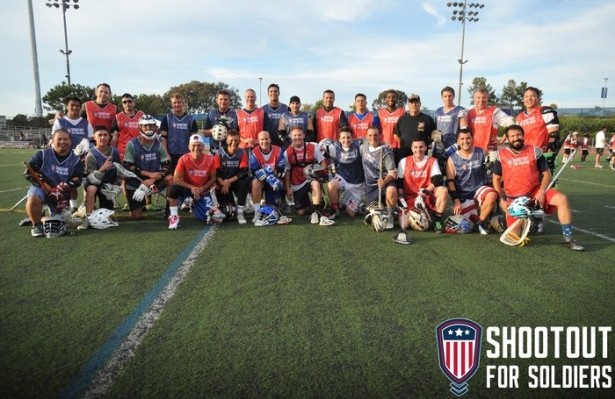 With fall ball ramping up and teams looking forward to the 2016 high school season the new lacrosse year has begun, and its time to review the Top 10 Stories of 2015. Today we get to No. 7, the inaugural Shootout for Soldiers California. Follow the links below if you missed the previous Top Stories of 2015:

Started in 2012 by a group of Baltimore high school students from Boys’ Latin School of Maryland, SFS has grown in popularity and success each year. The inaugural SFS event shattered the world record for world’s longest lacrosse game ever, and raised $105,000 through the participation of 1,000 players. The next year SFS expanded to McDonough High School in Baltimore and added a girls’s game. Long Island was addd to the list in 2014, and this year Shootout for Soldiers debuted in Boston, Ohio, and Orange County.

Not surprisingly the Orange County lacrosse community opened their arms to the event, and with the assistance of the palm trees, ocean front view, and a 75 degree day showed that Shootout for Soldiers can succeed from Coast to Coast.  4,300 spectators and 675 players walked through the front gates of Dana Hills to help push SFS towards the $1 million mark in total funds raised.   Shootout for Soldiers has now raised $917,455 in four years to support the troops.

Tyler Steinhardt, founder and organizer of SFS, was impressed by the can-do spirit of the local lacrosse community, “The support of the local lacrosse community made the difference. We received enormous support in helping promote the event from local media outlets like MaxLaxOC, The Lacrosse Network and the local US Lacrosse chapters which really helped gain attention to the event. That support, coupled with the grassroots lacrosse community, from Dana Point to Temecula, was instrumental in getting teams involved and attendees out to the event.  The Veterans Game was particularly special at SFS California since there was involvement across a wide range of generations – we had active duty Navy personnel as young as 21, and veterans as old as 67. They were all there simply for the love of the game and to support their fellow service members and many of these men stayed throughout the 24 hours of the event.”

When asked if SFS will return, Steinhardt replied “We’ll absolutely be back to southern California. There’s an incredibly passionate lacrosse community, and we’re eager to continue to grow and develop the event for next year.”
Dates and venues for SFS California 2016 will be determined this fall. Visit shootoutforsoldiers.com/volunteer to help locally with the event.  Help is needed in all areas from promotion to event logistics. Any involvement helps!