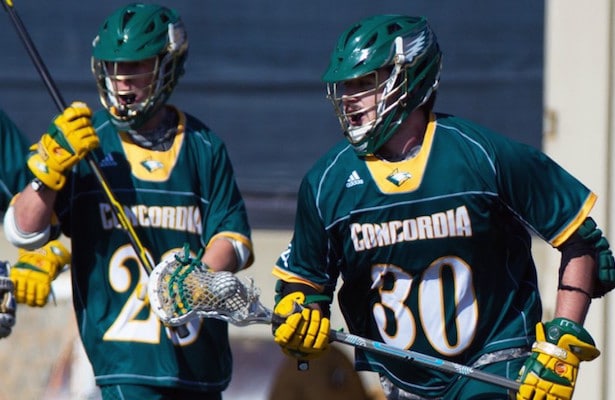 With fall ball ramping up and teams looking forward to the 2016 season, the new lacrosse year has begun, and its time to review the Top 10 Stories of 2015. Today we get to No. 6, Concordia University’s journey to the MCLA Division 2 National Championship game. Follow the links below if you missed the previous Top Stories of 2015:

The Concordia University Eagles shocked the MCLA in 2015 by taking a perfect 17-0 record all the way to the MCLA Divison 2 National Championship game.  To put this accomplishment into perspective, the Eagles finished the previous season with a 7-8 record and had never advanced past the first round the National Tournament.  That history resulted in a lack of respect in the early season polls; the Eagles opened 2015 ranked only 19th.

The Eagles started to show signs early though that 2015 may be different.  Playing up early in the year, they opened the season with four consecutive wins over MCLA Division 1 teams.  Thus began their steady ascent to the top of the rankings, a perfect regular season record, and the No. 1 seed in the National Tournament.

Much like the 2007 New England Patriots though, Concordia’s quest for a perfect season ended with a heartbreaking loss in the 18th game of the season.  The University of Dayton Flyers staged a late comeback in the championship game to hand the Eagles their only loss of the season.

Coach Ryan Brent who was named the MCLA Division 2 Coach of the Year took some time with MaxLaxOC.com to reflect on last season and share his thoughts on what the future holds.

What were some of the keys to the team’s success in 2015?
Our team was successful last year because of their desire to be great. We brought in a very talented recruiting class along with a great group of returners that allowed us to compete at the highest level against each other in practice. Having that great pace and energy at our practices meant that our team was prepared come game time. In addition to the work ethic, our young men were very close, and it showed up on the field. We have a family first mentality in our program and our 2015 team really exemplified that. Our team went through a lot to make it to where we were in 2015. That struggle led to tight bonds that held our team together when it mattered the most.

Were there any specific games or events during the season where you knew the team had the opportunity to do something special?
I knew immediately coming into the season that we would have an opportunity to be the best team in the country in the MCLA DII. Based on the recruiting class that we signed and the returners that we had, I knew that we would have All-American talent at almost every starting spot.

The expectations were extremely high after a tough 7-8 season, and we had a very focused group. The only concern was maintaining that level of focus for the entire season. We thought we could be special, but we opened the season with a lackluster performance at UCLA. Our team didn’t really click until we played our two exhibition games against Whittier and Chapman. Both games were extremely competitive and our guys battled through some sloppy play to get back into these games. We didn’t play our best, but still played 1 goal games against two of the top teams in Southern California. This gave us confidence that no matter what the situation was that our guys would keep battling.

How many seniors graduated and will not return this year?
We graduated 12 seniors this past year. Many of them were involved with the first recruiting classes at Concordia and helped pave the way for our current success. Their leadership and contributions will be sorely missed, but we are excited for all of them to start the next chapter in their lives.

Any key newcomers for 2016?
I am extremely excited about our incoming freshman and transfer class. They are a huge part of what we are going to accomplish this year. After graduating 12 players, we had to fill that gap with a big influx of talent in order to maintain the high standards we have set for our program. Our incoming players have to prove themselves to earn impact spots and it is too early in the fall to tell who will really step up, but we are excited about the prospects.

If we focus on these goals, our lacrosse outcomes will take care of themselves. We expect to compete for league and national championships every single year, but these things don’t happen unless you embrace the daily process.

What is the best way high school players interested in playing at Concordia get on your radar?
Concordia University is unique in Southern California in that we are a “club” program that is supported by our athletic administration. This means our student athletes receive all the same benefits as any other Concordia student athlete – including access to athletic trainers, facilities and scholarships. If you want to play lacrosse in Southern California and experience the small school environment, there really is no comparison. We are always looking for the next great group of student athletes who want to join our family at Concordia.

We will be out at most of the local adrenaline and 3D recruiting tournaments as well as Surfstorm and Sandstorm. Any athletes who will be attending these tournaments and are interested in CUI should contact me or another member of the Eagle coaching staff prior to the event. Prospective student athletes can also check us out online at cuieagles.com and find the recruiting questionnaire there. I am always available to respond to any inquiries by calling (949)214-3226 or emailing at ryan.brent@cui.edu.