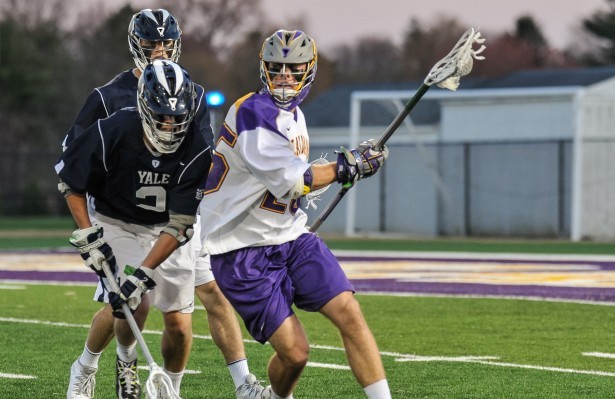 With fall ball ramping up and teams looking forward to the 2016 high school season the new lacrosse year has begun.  MaxLaxOC.com reviews the Top 10 Stories of 2015 starting with No. 10: Stone Sims.  You need to look no further than this San Clemente alum and Albany University sophomore to see that the recruiting system is far from perfect and that hard work and perseverance pay off.

Sims was ranked as the 19th best freshman in the nation in the Inside Lacrosse DI Freshman Rankings earlier this year.  He finished the season with 31 groundballs in 19 games for the Danes and made it all the way to the NCAA semi-finals.  In the age of accelerated recruiting, Sims is a role model for players feeling like they should take up tennis because they don’t have a verbal commitment by the time they graduate from eighth  grade.  Sims flew under the recruiting for much of his high school career and did not commit to Albany until February of his senior year.

Sims was the only player from Orange County to make D1 Freshman Rankings as well as the highest ranked Californian.  He is also one of 10 freshmen in the Top 25  who did not make the pre-season IL Power 100.

Congratulations Stone!  The Top 25 in the IL list are presented below.

Playing behind a young defense in a league that’s getting tougher each season, McDermott was named the Southern Conference Freshman of the Year. His save percentage got better as the season went along, ending the year as the top freshman goalie by save percentage.

A second-team All-Big East selection, Cerrone’s playmaking ability sparked a Wildcat offense that battled injuries throughout the season but was still able to advance to the conference semifinals vs. national champion Denver.

In the first freshman rankings, Wynne was averaging 4.00 points per game. In the second, 3.11. In this, 2.46. For a finisher like Wynne, it’s hard to balance the cause in down-turned production between decreased performance and increased attention from opposing defenses. It’s also difficult to balance the value of the Fighting Irish’s late-season performance and highlight-reel plays like his midline goal vs. Albany. This spot feels right.

Walsch stepped into a squad that graduated a lot of senior scoring and was approaching a one-year stint as an independent, an finished as the leading scorer for a Falcon team that finished 8-7. Worthy of note, Air Force finished 5-1 against Southern Conference teams in 2015, their league home next season.

Stanwick saved some of his best play for last, putting up 22 points in the Blue Jays’ last seven games, including a highlight-reel 3&2 day in the NCAA Tournament first round vs. Virginia and 4&2 vs. Syracuse in the Quarterfinals.

The Big Ten Rookie of the Year, Tinney was frequently the Blue Jays’ offensive catalyst when things otherwise stagnated. He’s a herky-jerky dodger capable of getting into the teeth of the defense and a dangerous outside shooter.

One of three freshmen USILA All-Americans, Berge earned an honorable mention nod. Berge is an excellent playmaker from the top of the box and a viable scoring threat, putting pressure on opposing defenses and giving Georgetown lots of options.

The ACC Freshman of the Year, Guterding had a reputation coming into Duke as a finisher; over the course of the season, he clearly emerged as a viable ball-carrier with the capacity to move the ball into a scoring position. He provides the Blue Devil coaching staff with a Swiss Army knife-level of versatility.

Ready for this? Fields’ 66 goals is the ninth-highest single season total of all-time. For that, he was named a USILA Honorable Mention All-American. Surely some of that success is a product of playing alongside Lyle Thompson, but — like Guterding — Fields showed that he’s more than just a scorer and Albany fans can be excited for how the Great Dane offense will produce in his hands.

The first first-team All-American freshman since Michael Powell in 2001, Baptiste was arguably the lynch-pin that allowed Denver to play a style that the Pioneers parlayed into the program’s first NCAA championship. While his face-off win percentage took a hit because of his NCAA Tournament first round game vs. Brown, Baptiste had four goals and an assist in Denver’s last eight games, and averaged 8.25 groundballs per game during that stretch.