Tommy West is the Defensive Player of the Week 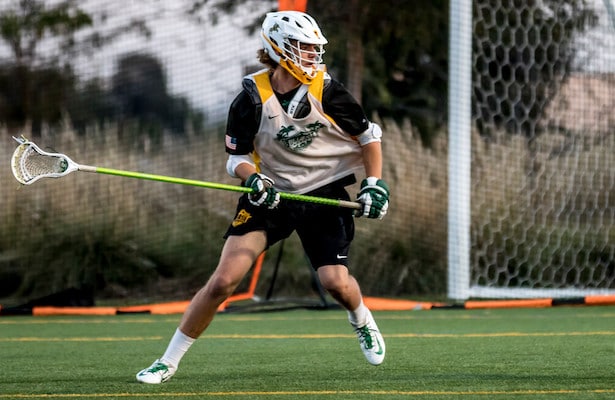 Tommy West of Edison is the MaxLax defensive player of the week. His performance vs Northwood on March 1 was a game changer in a dominant 10-2 victory for the Chargers. Give a big assist to Shane Fullbright who helped West shut down one of the top scorers in Orange County.

West and Fullbright were given the unenviable assignment of defending Northwoood’s Michael Bellas. Bellas average five goals and 1 assist per game in 2015. West and Fullbright combined to hold him to 1 goal and 0 assists. Their aggressive switching hard double teams caused turnovers and transition opportunities for the Chargers. West picked up 11 groundballs, started three fast breaks and ran it out in transition four times. The first two goals of the game were initiated by West recovering groundballs, starting the fastbreak, hitting the point man, one more pass, and a goal. That’s ballin lax fans. Nearly three ground balls a quarter! In addition Fullbright had six ground balls.

West says his favorite thing about lacrosse is the intensity of the sport and the competition. He would like to play in college but is not sure at what level. He’ll play this summer for 3d and hopes to catch the eye of the right program. At 6’5″ with excellent speed and a high motor, some college coach is gonna get really lucky. He also has an interest in following in his fathers footsteps and serving in the United States Marine Corps.

Devin Arkison was a 3x All American defenseman at Hobart College, and is a member of the New Jersey Lacrosse Hall of Fame. He has coached elite level high school teams and offers private instruction as well. He can be reach at d_arkison@hotmail.com for private defensive sessions.