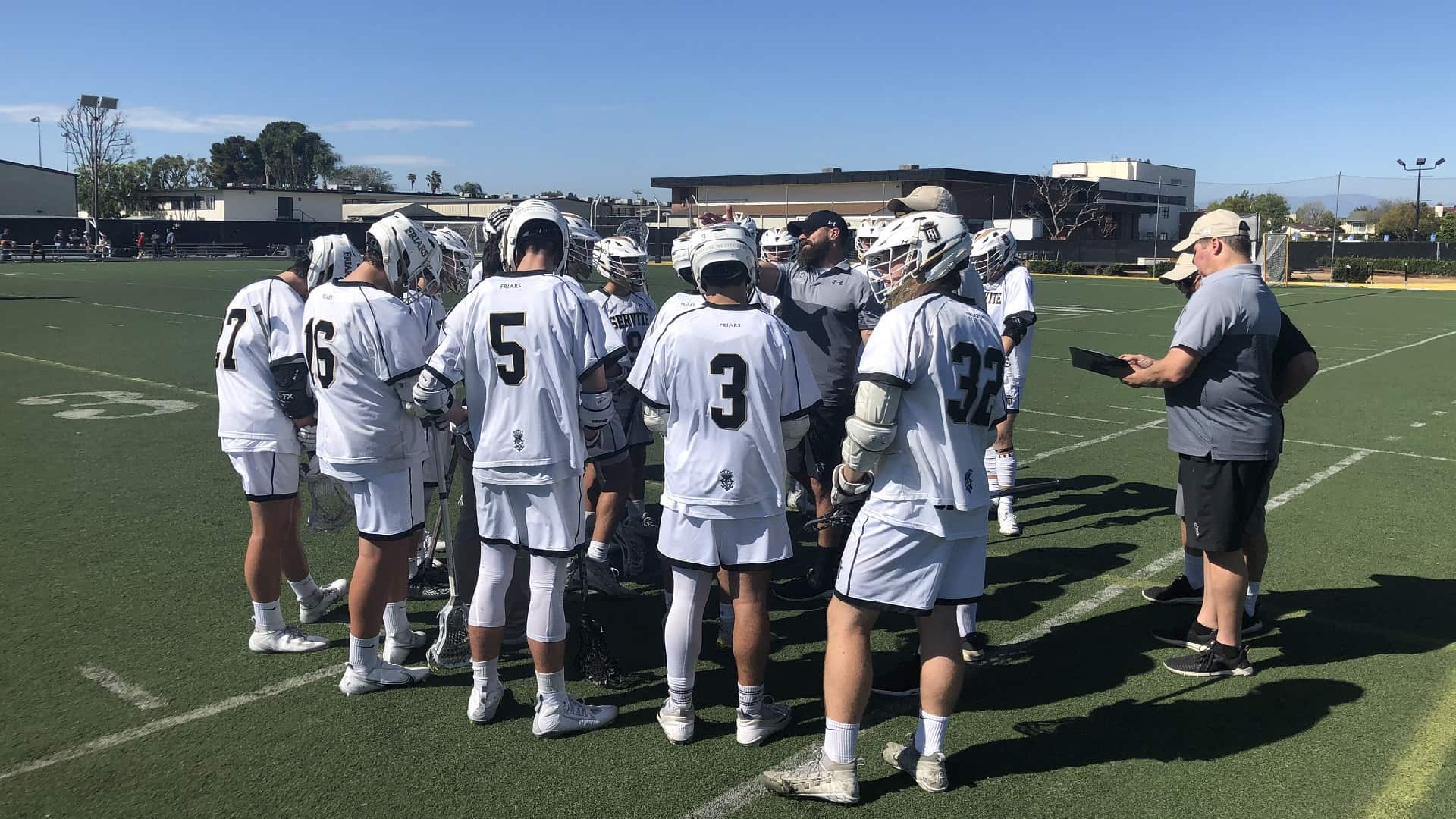 Coaching a high school lacrosse team is hard work.  Maintaining long-term stability in a high lacrosse school program is harder yet, and that is reflected in how few coaches have stayed at the same program for 10 years straight.  Servite coach Tom O’Leary joined that select club this season.

“Being here 10 years means stability to the program. Its good to grow the brand and grow that knowledge of what Servite’s about and what message we’re trying to teach to young men,” O’Leary said.

O’Leary, a Long Island native, was a multi-sport athlete in high school and college, and was actually recruited to SNHU to play soccer.  He not only played soccer and lacrosse at SNHU but also ran cross country.

His Southern California lacrosse journey began in 2008 when he accepted an invitation from former SNHU roommate and lacrosse co-captain Mike Hutnick to move out west and help him coach club and high school lacrosse.

O’Leary was Hutnick’s assistant at JSerra in 2009 and 2010 where the two former college teammates lead the Lions to a Trinity League title and a division 2 Orange County Championship.  They also ran 4Leaf lacrosse Club for several years.  O’Leary heard after the 2010 season that Servite had an opening for a head lacrosse coach.

“It was at that point that I wanted to accept the challenge of running my own program and applied,” O’Leary said by email.  “After looking into Servite more, I realized just how much their mission aligned with my core values and beliefs.  I was fortunate to be given the opportunity to accept the position.”

Although O’Leary has led the Friars to four consecutive playoff appearances since 2016 and was named the 2018 Orange County Coach of the Year, he and the Friars have experienced ups and downs during his tenure.

In 2013, Servite went 2-16 and won only one league game. O’Leary said that year made him a better coach.

“You really don’t get to understand where your shortfalls as a human being until you really fail and fall on your face,” O’Leary said. “I think at that point my coaching style had to go from a rougher exterior and getting after guys and yelling at guys to let them understand that there was a lot of love for the process they were going through.”

O’Leary’s transition to a more positive, caring coach style was formed by his own experiences as a player.

“My high school coaches had a large impact on who I am as a coach, but not the way that you would think,’ O’Leary said.  “I did not enjoy playing for either (soccer/ lacrosse) of my coaches throughout my high school career, although the experience did help in some way.  I feel my purpose is to never have one of my players have that same experience that I had. It wasn’t until college (SNHU) where I met Paul Calkins that I actually had a coach that cared about the individual first.”
His new approach started producing results almost immediately.  2014 saw the Friars improvement, having won six games, but in Trinity League play, despite the departure of St. Margaret’s who was in the league at the time, the Friars went winless. O’Leary made note of how that year his team was on the rebuild.

That year, Servite played No.1 seed Corona Del Mar tight, only losing 13-10 after it was 9-9 after three quarters, according to O’Leary.

“To play that caliber of a team [Corona Del Mar], it’s something that will always be special and that’s something you want to have your guys rise to the occasion,” O’Leary said.

Sea Kings coach G.W. Mix praised O’Leary for the great job he’s done at Servite and how well his players respond to him.

“Tom does a great job with his program and his kids are well-coached, they’re disciplined, they’re fundamentally sound, athletic and hard-working,” Mix said.

Sound fundamentals and hard-working are a common theme when other coaches talk about the Friars.  The O’Leary work ethic is now being passed down to it’s third generation.  O’Leary learned it from his father and now he is passing it on to the Friars.

“The largest impact from a coach has been my father,” O’Leary said.  “He was a soccer and lacrosse coach on Long Island for over 34 years.  As the head coach of Wantagh High School, In the early 1990’s he won multiple state soccer titles.  As a sixth, seventh, and eighth grader he would take me to his varsity soccer practices.  He would require me to join the team and try to keep up.  For some time, It was humiliating for me to be the son of the head coach and trying to keep up with varsity guys much older and bigger than me.  I realized much later how that shaped my work ethic and me as a young man.  He was pushing me to want to be better, but letting me fail on my own.  It is something I can never thank him enough for.  It still plays a huge role in my life today.”

2017 saw Servite win 13 games that year, which is the most the Friars have won in a single season. One of those 13 wins came in the playoffs where Servite beat Yorba Linda 16-7 at home, marking the first playoff win in team history while the game was the first playoff game the Friars ever hosted.

“That was a big momentum step for the program to see the hard work was paying off for the guys. And then for the alumni to be able to look back and see that there was progress being made,” O’Leary said.

Servite played a tough schedule in 2018, which had high and lows. The lows included sitting at 3-7 at one point of the season, but O’Leary and the Friars didn’t let that deter them, as they went 4-2 in league and beat Mount St.Joseph of Maryland.

“It [being 3-6] is nowhere that we ever intended to be at that point with the roster that we were fielding. We [the coaches] were preaching to be strong from the neck up,” O’Leary said.

Another high for Servite in 2018 is that it won a playoff game, upsetting San Clemente on the road 9-8 as a 10-seed. The Friars eventually fell to No.2 seed Foothill 16-11, but earned the respect of others after their season.

At the end of the year, O’Leary was named the U.S. Lacrosse Orange County boys high school coach of the year.

“His teams are always fundamentally sound, organized, and well coordinated especially on the defensive side of the ball which is great to expose needed areas of improvement on your offense,” Newport Harbor coach Mark Todd said.

Todd also mentioned that his team and Servite have had many close and intense games and that O’Leary has developed players well throughout the years.

“Tom has done a tremendous job developing Servite players between their freshman until the senior year. Mental toughness, sound fundamentals, and respect for the game is what we’ve all come to expect from Tom O’Leary’s Servite Friars,” Todd said.

Ryan Brent, the current coach at Santa Margarita, said that O’Leary, who is a close friend of his, does everything the right way.

“He’s extremely intense, but he’s probably the most liked coach in Orange County. He does everything the right way and he’s a really smart coach. You’re going to get a gritty, tough, well-coached team when you play [Servite]. Full respect to him,” Brent said.

Despite being intense, O’Leary has a softer and calmer side to him according to Servite assistant coach Brian Dunn.

“My favorite thing about Tom is probably the fact that he can eat you, but he’s a big teddy bear,” Dunn said. “Defensively, Tom is as good as it gets. There’s not many guys out here on the West Coast that know or teach how to throw checks at appropriate times, how to look for guys that are not doing a good job of protecting their sticks and from playing with him out on the field in men’s league, he knows how to create a yard sale that’s for sure.”

One of the reasons O’Leary wants Servite to one day win the Trinity League title is to bring pride to the alumni. O’Leary said that his team goes by the four D’s at Servite, “desire, discipline, determination and dedication” as well as master of self.

“If you’re not working on your own, to improve the quality of the team as a whole, then you’re going something wrong,” O’Leary said. “I feel I’m at the peak of where I could be, I would never leave Servite to go to a different high school. The only way I’m able to do this is through the support of my wife and family.”

When asked to share a favorite memory or two from his first 10 years at Servite O’Leary was typically humble.

“A decade as a Friar is a long time to attempt and select only a few memories,” he said. “I feel each year the program makes strides and accomplishes new things never done before.  The most genuine memories lie within the young men that I am blessed to have coached.  Some have gone off to college, played at their respective schools and now are back with me as a part of my eight man coaching staff. That is truly a gift for that relationship to change from coaching a young man as a player, to then helping that young man coach players of his own as a fellow coach.
The commitment from the young men in my ten years has blown me away.  We continue to fight and grind to hopefully bring that Trinity title back to Servite for all those you came before us.  It is the time I have spent with those groups of young men that hold too many memories to describe.”