Tobias Delivers in OT for Beckman 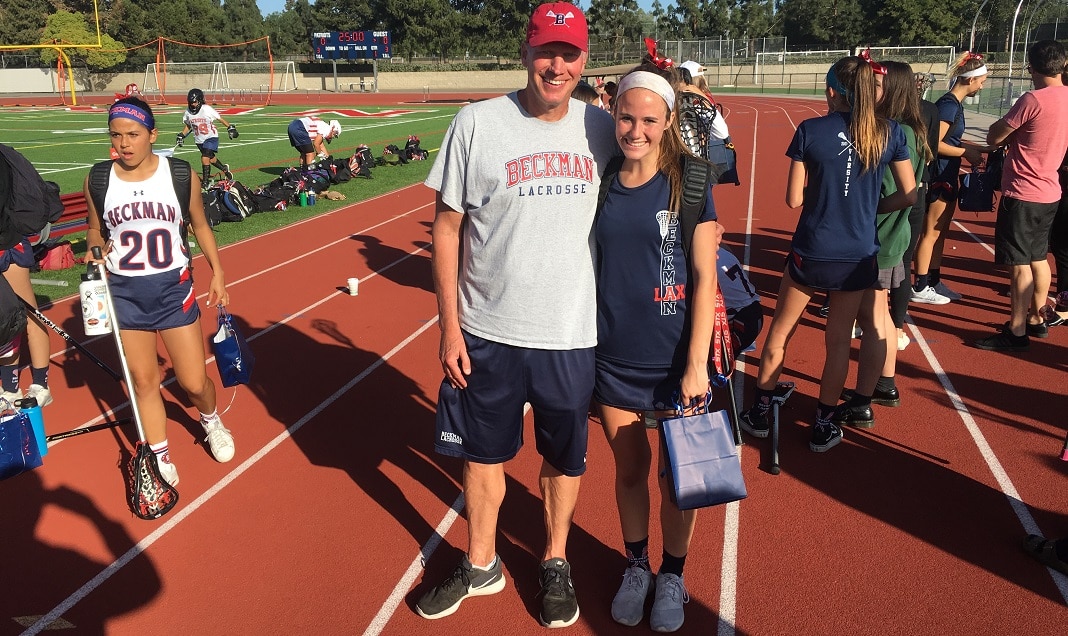 For the second time this season, the Beckman girls lacrosse team, a.k.a. “the cardiac Queens” went down to the wire with Corona Del Mar. Only this time, the game went into overtime.

With the Pacific Coast League championship likely on the line, the Patriots turned to Carly Tobias in OT her for the second time this season, and once again she didn’t disappoint.  Tobias who delivered the Patriots an overtime victory against San Juan Hills in March did it again on Wednesday.  In addition to scoring the walk-off goal, Tobias finished with a game-high three goals, as the Patriots beat the Sea Queens in overtime 7-6 on Wednesday at Beckman High School.

Tim Duchene, in his second year coaching with the Patriots (5-3, 5-0), has his team in great position to finish in first place in the league, as they are now a game and a half on the Sea Queens (4-8, 4-2) in the standings.

“It means a lot because they [CdM] took us [down] both times. It didn’t mean that wanted it anymore this year,” Duchene said. “We got to clean up a lot of stuff. Ball possession is so important, and I think sometimes the girls think scoring is important, but you can’t get down to set up your offense if you don’t clear well.”

The Patriots tied the game at 5-5 and took the lead at 6-5 off of a goal from Tobias. The Sea Queens didn’t get their first goal of the second half until Joslyn Simaan evened the game at 6-6 on a free position goal.

While neither team found the back of the net after Simaan’s goal, the Patriots’ best chance at taking the lead came toward the end of regulation. The Patriots forced CdM into a turnover and inbounded the ball with five second left. The Patriots got a good look at the net, but it was saved by CdM goalie Ashley Olson.

In overtime, Taylor Stern won the draw for Beckman and found Tobias for a shot, but she misfired. The Patriots retained possession and Stern found Tobias again and this time, she found the back of the net for the game-winner.

For the Sea Queens, Simaan led the way with two goals while, Ellery Amdor, Lauren Rowe, Caroline Brewster and Emily Faludy notched one goal apiece. Olson made 10 saves for the Sea Queens.

“I think we were nervous. I think we just had the jitters still that we entered the first half with and it took us a little bit to get our composure back. When we were huddling [after the game], the girls are proud of the game, proud of the attitude and composure they kept and that going forward will only be a strength for us,” Sea Queens coach Aly Simons said.

Up next for Beckman, a home game against Los Alamitos at 4 p.m. CdM plays at Mater Dei the same day at 2:30 p.m.