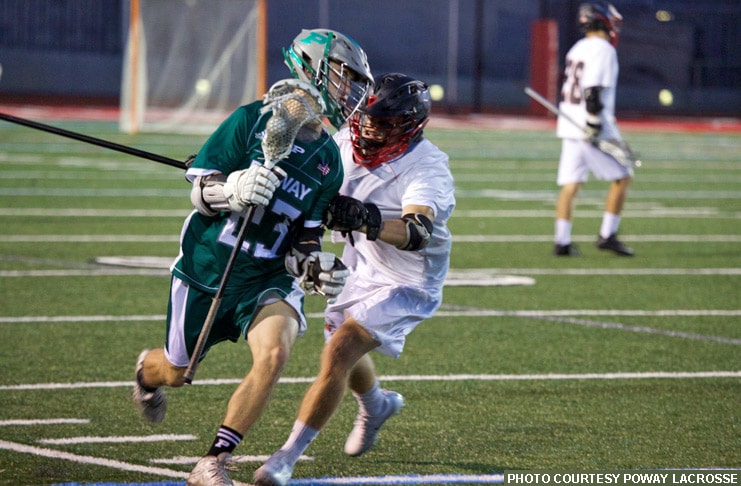 The Poway Titans pushed their win streak to six on Saturday with a 14-4 nonconference road win over Palos Verdes. Poway entered the game ranked No. 3 in San Diego and No. 13 in California and easily dispatched the higher-ranked Palos Verdes squad, which started the day at No. 6 in California.

The Titans led from the opening face-off, getting early goals from juniors Harrison Greaves, Kienan Morrissey and senior captain Owen Springett (UMBC) before six minutes had elapsed. Palos Verdes surged to make it close early, pulling within one at 4-3 on the strength of two goals by junior attackman Jack Collins (Bucknell), but Poway then rattled off six unanswered goals before halftime to put the game out of reach.

The Titans got production from many of their usual suspects, as senior scoring leader Nick Beeson (Bryant) scored four goals, and attackman Greaves, who is second on the team in scoring, had three goals and two assists. Also scoring three goals was midfielder Morrissey, who has come on very strong lately with 15 goals in his last six games. Seniors Springett, Jack Woodard, Bret Masaki and junior Kobe Brown had one goal each, and sophomore attackman Eli Butler dished out three assists.

Poway freshman FOGO Teagan Bultman (Brown) has found his groove during this stretch and perhaps deserves as much credit for the Titans’ winning ways as anybody. Bultman won 17 of 21 faceoffs Saturday and is winning nearly 70 percent of his battles at the X for the season.

The Poway defense has turned up its game of late as well, allowing only four goals on Saturday. Seniors Adam Voggenthaler (Endicott), Spencer Vierra (TCU) and junior Chase Crawford led the way, along with LSM Springett and defensive midfielders Brown, Jack Estepp and freshman Marquez White (Syracuse). Poway forced seven Palos Verdes turnovers, collected 29 ground balls and allowed only 14 shots on goal by the Sea Kings. When PV did get shots off, the Titans goalies were up to the task, as junior Kellan Cutting saved seven and freshman Ben Looges stopped three.

The Titans are 12-2 and playing their best lacrosse of the season heading into their spring break week, and they will need to continue that surge as they will face arguably their toughest two-game stretch of the season next week. Poway plays host to Loyola-Los Angeles, ranked No. 2 in LA, on April 18, and then plays host to No. 1 ranked Torrey Pines on April 21 in a rematch of the 2015 and 2016 San Diego CIF championship.