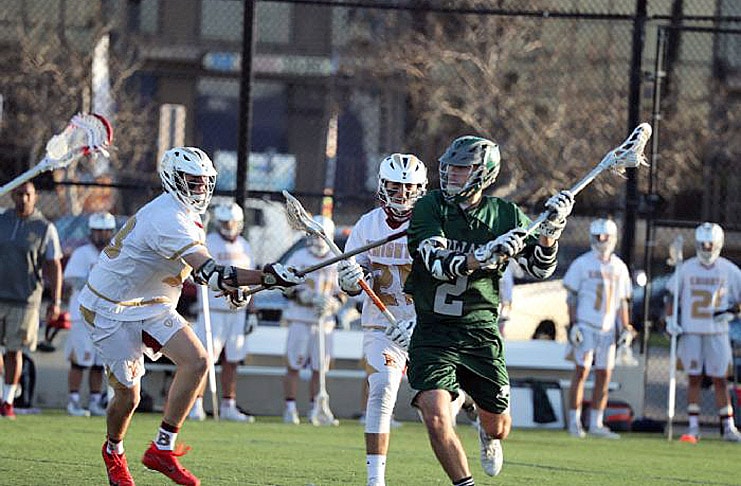 The Poway Titans, No. 3 in the CIF San Diego Section, closed out their 2017 regular season campaign with convincing home wins over two of their rival opponents. Wednesday night Poway, rolled past the Cathedral Catholic Dons 15-4, and Friday night the Titans dispatched crosstown rival Rancho Bernardo, beating the Broncos 16-3.

Poway’s most experienced players led the way in both games. Against Cathedral, seniors Nick Beeson, Matt Letteri, Owen Springett, and Jack Woodard were responsible for 10 of the 15 goals and 6 of the 8 assists. Beeson led with four goals, and Letteri scored three.

Against Rancho Bernardo, Beeson, Springett and Letteri spread eight goals between them, and senior defenseman Adam Voggenthaler got in on the action, netting two long-stick goals and collecting seven ground balls. Seniors Bret Masaki and Spencer Vierra scored a goal each to round out the win.

The 2017 Titans knocked down several records en route to this regular season finale. Beeson, who earlier claimed the all-time Poway goal scoring record, smashed the single-season record against Cathedral and now stands as the only Titans player to score 60 goals in a season. Additionally, the 16 regular-season wins is a Poway record; and the Titans will try to win three more in the playoffs to set the all-time Poway mark.

The 256 goals Poway has scored this season stands just eight shy of the Poway record (set in 2015). Additionally, the .650 save percentage achieved by junior Kellan Cutting in the cage is third all time for the Titans, and senior Jack Woodard‘s 34 assists thus far puts him seventh on Poway’s all-time list.

For the season, Poway boasts an average of nearly 14 goals per game, with six Titans scoring more than once per game and five Titans in double-figures in assists. Poway has also been effective at the face-off X, winning 65 percent of its face-off opportunities. Defensively, besides Cutting’s strong performance in the net; the Titans also have averaged more than 23 ground balls and eight caused turnovers per game. Junior Kobe Brown leads the team in both categories.

The Titans will put their offensive prowess on display in the first round of the playoffs on Friday night, when they play host to No. 6 San Marcos in the CIF Open Division quarterfinals.