Poway Chips Away to Top Westview, 6-4 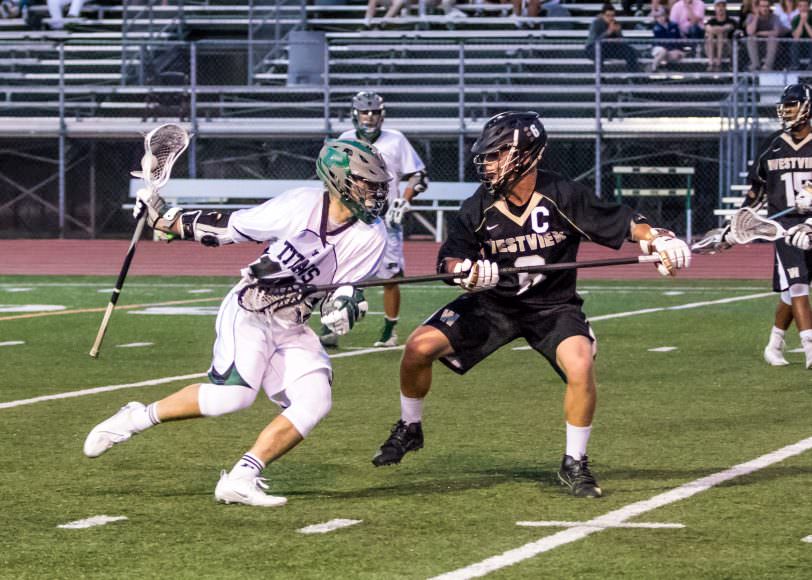 The Poway Titans secured a 6-4 conference victory over the Westview Wolverines this past Wednesday at Poway High School on senior night.

The Wolverines struck first blood with an unsettled and unassisted man-down goal by Jared Nagro, but the Titans answered with an unassisted goal by Zach Hodge to even the score at one apiece. However Westview answered with two man-up finishes from the left wing by Ryan Marasco to go up 3-1 with 4 minutes remaining in the first half. The Titans’s once again chipped away at the lead with a goal by Harrison Greaves assisted by Zach Hodge to narrow Westview’s lead to 3-2. The Wolverines struck again on an outside rip by Adam Tu fed from TJ Summers to go up 4-2 with 27 seconds remaining in the first half, but this was quickly answered when Jake Fisk gobbled up a ground ball on the ensuing faceoff and took it the distance for a quick score with 18 seconds remaining in the half to narrow the score to 4-3 in Westview’s favor.

The second half was all Titans as they dominated possession and were able to chip away at the lead over the next two quarters. The score was evened at 4 apiece when Poway’s Matt Letteri found Zach Hodge for a finish with a little over two minutes remaining in the 3rd quarter. Poway struck again when Zach Hodge found Brad Belasco with a strong outside left-handed finish to go ahead 5-4 into the 4th quarter. Poway’s Jack Woodard then found Jake Landon for an insurance goal, which ended up being the last of the game, with a little over 8 minutes remaining to go up 6-4.

While excellent team defense and play by Westview’s goalkeeper Connor Ciemiewicz (18 saves) kept the Wolverines in the game, the difference ended up being Poway’s ability to limit Westview’s offense to a total of 18 shots on the night by dominating time of possession.