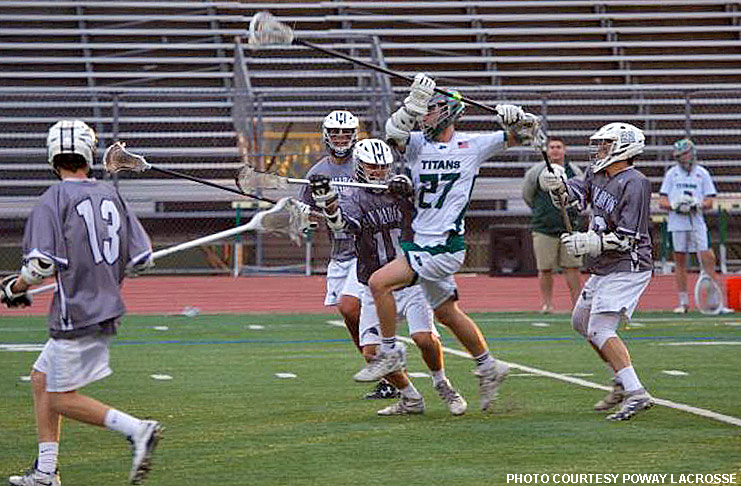 As in each of the previous two seasons, Poway lacrosse coach Zack Burke might have his No. 3 Titans playing their best lacrosse at the right time. Poway seems to have found its stride both offensively and defensively as the Titans crushed the No. 6-seeded San Marcos Knights 17-3 on Friday night in the first round of the San Diego Open Division playoffs.

The Titans offense was on point from early on, and achieved yet another milestone in what already has been a historic season. Poway’s offense has now netted 273 goals on the season, eclipsing the previous team-high mark of 264 set in 2015. And as with most games this season, the Titans again found production from a variety of sources. In all, 10 different Poway players found the net, with senior captain Owen Springett (UMBC) and junior midfielder Kienan Morrissey leading the way with three goals each. Five Titans also contributed eight assists, with Poway assist leader Jack Woodard‘s three dimes topping the list.

As strong as the Poway offense played, the defense stepped up even more, especially considering that San Marcos decisively won the face-off battle. Knights’ sophomore FOGO Mac Leonetti turned in a strong performance at the X, giving San Marcos added offensive opportunities, but junior Titans goalkeeper Kellan Cutting and the Poway defense were up to the task. Cutting and backup goalie Ben Looges saved 12 of the Knights’ 15 shots on goal, and Poway defenders caused 10 turnovers and scooped up 24 ground balls. Senior defenseman Adam Voggenthaler (Endicott) had a strong all-around game, causing two turnovers, picking up three ground balls, and adding a long-stick goal on the other end.

San Marcos came into the game with an impressive 19-1 record but were significantly undermanned at the midfield position with starters Luca Lietti, Will Hauri, and Cole Irvine all out due to injuries. The Knights did get two scores from midfielder Brad Dodds and one from Jason Stimeling.

Poway will play next on Wednesday at No. 2 La Costa Canyon in what should be a great semifinal rematch. LCC also won easily on Friday night, beating Santa Fe Christian 18-5, and beat Poway earlier this season in a thrilling 8-7 contest.