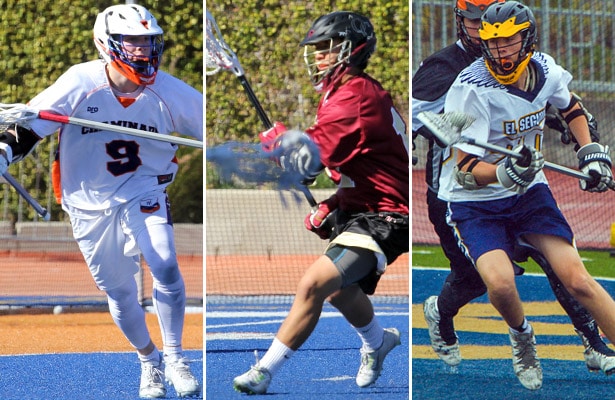 Chaminade, Oaks Christian and El Segundo made significant moves upward in Week 6 of the US Lacrosse/MaxLaxLA Coaches Poll, while Thousand Oaks slipped three spots on the heels of a four-game losing streak.

But Chaminade (8-3), fresh of Friday’s 9-5 win at Crespi, climbs one spot to No. 6, its highest ranking in the two years of the poll. The Eagles have lost only to the Nos. 3 and 4 teams thus far and played inspired defense Friday night in holding the Celts to two goals until the fourth quarter. It was their fourth win in their last five games, with the lone loss coming against Amador Valley of Pleasanton, the No. 6 team in LaxPower.com’s North Coast Section ratings.

Oaks Christian (4-4) also moved up this week, climbing from No. 13 to No. 11 after its stunning 14-13 upset at No. 4 Westlake on Friday. The Lions appear to be improving rapidly, but they will be severely tested this week, with games against Oak Park today, Agoura on Wednesday and at Newbury Park on Friday.

El Segundo (6-4) is the third team making a big move this week, as the Eagles re-enter the Top 20 after winning their fifth consecutive game Friday. After opening the season at No. 18, El Segundo dropped out after four losses in a row. Things have turned around since, and the Eagles head into Ocean League play this week with their offense clicking.

Thousand Oaks (4-6) lost three games in a row last week and has lost four in a row overall. That caused voters to drop the Lancers from No. 6 to No. 9. With Westlake coming to visit Wednesday, T.O. will have its hands full stopping its skid.

The Lancers’ drop in the poll also moved Peninsula (8-2) and Newbury Park (7-3) up one spot each.

Oak Park (5-8) lost last week at Westlake and ended up swapping places with Oaks Christian in the rankings, dropping from No. 11 to No. 13.

Crespi (0-10) finally dropped out of the Top 20 after hanging on to that last spot for the last few weeks. The Celts couldn’t solve Chaminade’s defense Friday until they already trailed 9-2. Crespi is averaging less that six goals per game.