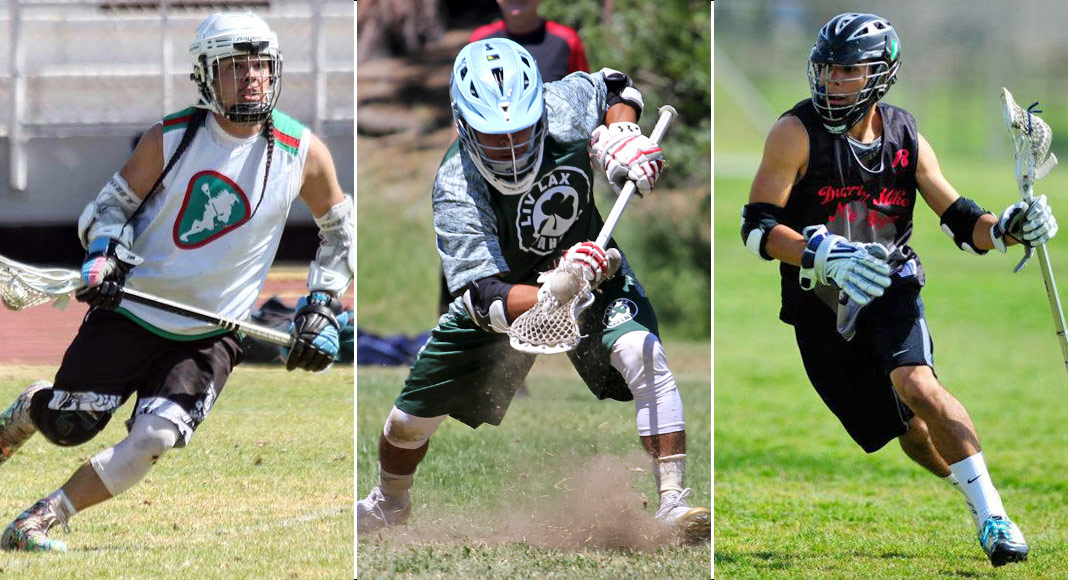 Los Angeles City Section alumni Matt Hernandez, Ernie Melero and Tim Gonzales earned spots on the Mexico Lacrosse roster for the 2018 FIL World Championships in Israel next summer, where they will represent both the country of their heritage but also the city of Los Angeles.

Hernandez (pictured, right) is a midfielder from Birmingham HS and Whittier College; Melero (pictured, center) is a midfielder and face-off specialist who played at Manual Arts HS and Tufts University; and Gonzales (pictured, left) is an attackman from Palisades Charter who is a veteran club lacrosse player in L.A. and all over the West.

“I’ve known those guys since high school,” Melero said. “We all had our different paths afterward, but we all came back, and we all have been playing here in L.A. It has been great traveling down there together for tryouts and now getting to share this experience with them.”

All three are first-generation U.S. citizens with at least one parent who was born in Mexico, making them eligible for the Mexico Lacrosse roster in international competition.

Four years ago, Paul Morgan, who played at Cal-State Fullerton and founded the 395 Starz club, made the Mexico Lacrosse roster for the 2014 World Championships in Denver.

“When people go down there from the States for the first time to play,” Hernandez said, “they’re kind of surprised. They’re not great, but if you could get the best of the best from down there and put them in the MCLA, they could definitely keep up.”

Gonzales agreed that the talent level in Mexico is surprisingly good, considering most players don’t learn the sport until college and the national program is underfunded compared to other international sports. The players all must raise money for the Israel trip this summer, not only for their own travel but also to help the club offset other expenses of the trip. To that end, he set up a GoFundMe.com page to fundraise for the three LA players.

Here’s a look at each of the three L.A. players who will represent Mexico Lacrosse this summer:

Melero started playing lacrosse as a freshman at Manual Arts High School, helping the team to its first two winning seasons as a junior and senior. He was named U.S. Lacrosse All-American as a senior in 2010, then played at Tufts University, where he was a part of four NESCAC Championships teams and one National Championship team. He graduated with a degree in economics in 2014 and has been a coach with Harlem Lacrosse-Los Angeles (formerly City Lacrosse) since 2015. He also coaches with the Santa Monica Berserkers.

Melero said he spoke with Mexico Lacrosse officials about joining the national team in 2014 for the World Championships in Denver, but he was unable to make tryouts due to his school and lacrosse schedule as a senior at Tufts in Boston. Four years later, he has the opportunity.

“I’m really happy to be able to be on the team this year; it means a lot,” he said. “It’s part of my heritage. My entire family was born in Mexico. I was the first to be born in the U.S. It’s just an amazing experience.”

Melero said he will be the starting face-off middie for Team Mexico, but he hopes to have the opportunity to stay on the field with the offense.

“I’m torn, because I think I’m one of the strongest midfield dodgers on the team,” he said, “but facing off is grueling, so I’m just trying to balance taking enough face-offs to help the team but still work in some offensive runs.”

A 2011 graduate of Birmingham Charter HS, Hernandez went head to head with Melero for three years in high school, then played at Whittier College, graduating in 2016. He works as a Public Safety Field Deputy for the City of LA.

Like Melero, Hernandez is a first-born American citizen. He said his father is from Mexico City and his mom is from El Paso, Texas, but her family is from Mexico.

“Just to wear the colors and represent the country where my family is from is an honor,” he said, “and then to play the game I love — there are a lot of kids in the world who have that dream.

“I’m American, and I’m very proud to be an American, but its an honor to represent that culture. I was born and raised in Los Angeles, and all the time in college, or in high school going to recruiting camps, I always felt like I was representing Los Angeles, too.”

He said he first contacted Mexico Lacrosse four years ago, then stayed in touch and eventually received an invitation to try out last September. Earlier that summer, all three played in the Lake Tahoe men’s club tournament, where, Gonzales said, a representative from Mexico Lacrosse saw them and asked Hernandez about his two friends, resulting in their invitation to the tryout.

“When I got the notification, I was excited,” Hernandez said of making the final roster, “surprised and excited and grateful. Three kids from Los Angeles get to have this opportunity.”

A 2008 graduate of Palisades Charter, Gonzales now is an assistant coach at Village Christian in the San Fernando Valley and works as a communications supervisor at AmeriPride Ambulance. He said he was introduced to the sport at a very young age and credits former Palisades coach Scott Hylen for teaching him the game.

“In California, it’s getting bigger now,” he said of the sport, “but when we started, no one really knew what lacrosse was. The three of us kind of grew up in rough areas, so to get the opportunity to play this sport, it kept me out of a lot trouble.”

Now approaching his 10th high school reunion, Gonzales is about to embark on his greatest lacrosse adventure.

“It’s a great feeling,” he said. “It’s a little difficult, because I have to get back into game shape, but it’s an amazing feeling. I went in not knowing what was going to happen, and to get the word that all three of us made it was amazing.”

An attackman, Gonzales was especially nervous going into the tryouts, because Mexico Lacrosse already has an accomplished attack line.

“I knew they weren’t taking but 3-4 attacks,” he said. “The three guys that they have, for them just playing for a short amount of time, their talent makes it seem like they’ve been playing a long time. That made it a little nerve wracking.”

He said the nerves were eased by having his former City League rivals and local club and pick-up lacrosse friends with him.

“We didn’t really know what to expect going down there,” he said. “But to be able to go down with Ernie and Matt, to be with those guys and have the chemistry we have together after playing all these years made it easier.”

“We all flew down there together; we all tried out together; we’ve all played together; and we all made it — that’s the most amazing thing.”