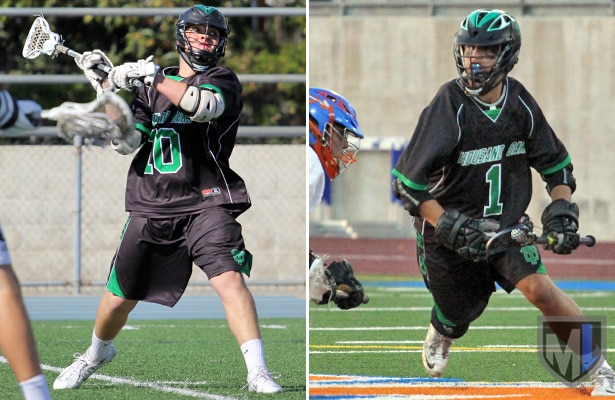 Thousand Oaks added lacrosse as a CIF sport in 2010. Six years later, with a roster loaded with players who had been in middle school way back then, the Lancers came within a few minutes of reaching the 2015 LA title game. Seventeen seniors graduated last spring, and the team changed coaches in the fall. Nevertheless, the Lancers were voted No. 4 in the US Lacrosse/MaxLaxLA preseason coaches poll. Can they live up to that billing? Here is our Thousand Oaks 2016 preview:

Coach: Michael Delabar; first season. Joined T.O. as an assistant over the summer, then took over the top spot when Tyler Gilbert resigned unexpectedly for family reasons.
Last season: 14-5 overall; 6-2 Marmonte League (tied for second place).
2015 playoffs: No. 6 seed; beat Mira Costa 10-9 in the first round; won 11-10 at Peninsula in the second round; lost to Crespi 14-13 in the semifinals.

2015 recap: T.O. opened the season ranked No. 8 in the coaches poll but quickly jumped to No. 4 after beating Crespi and taking Loyola to overtime on the road. They followed with some uneven performances, though, needing overtime to beat Agoura, losing to Harvard Westlake and struggling through a rocky first half before beating Oaks Christian 12-8. Then came Westlake — the Lancers led 9-5 late in the third quarter but lost 14-9.

Thousand Oaks dropped to No. 6 in the coaches poll, and some wondered whether the Lancers would turn things around or go into the tank. They answered with seven consecutive wins, including a 17-8 thrashing of previously undefeated Westlake. That sent T.O. into the playoffs with confidence. After two one-goal victories the Lancers came up just short in a wild semifinal game with Crespi, which scored the game-winner with 1:21 to play after seven ties and seven lead changes.

Top players: Coach Michael Delabar provided the following names and analysis:
With 17 seniors graduating last year, we will be a young team though this season. We have some very talented sophomores that will absolutely make an impact — guys like Nick Riggio, Spencer Whinery, Drew Conlon and Drew Steckline, who were all major contributors as freshmen on JV. Alex Fortunato will likely be our starting netminder as a sophomore.

I think our biggest challenge will be matching up with older more physical teams. We have some returning juniors that will really fill in some good roles for us; attack/middies Soren Bay, Jack Greely and Jonathan Chow will be guys I can put anywhere on the field. If Zac Asbury and Will Dutton improve on their incredible seasons last year, we may surprise some people.

We will definitely rely most on our senior leaders. Alex Ditto will be at the helm of our midfield crew, and Cristian Quiroa at LSM will be everywhere on the field. Our defense will be held down by Chase Thomas, an exceptional young man who I would without a doubt go to war with.

It helps, too, getting the ball at least 75 percent of the time with Matt Parham at the faceoff X.

2016 Outlook: As Coach Delabar notes, the Lancers are young. But this program cranks out top players with regularity. The only real question for the Lancers is whether the younger guys can fill the shoes of the 17 graduated seniors? Possession shouldn’t be a problem with Parham at the dot, and there definitely are finishers in the offensive end. But replacing a two-year starting goalie in C.J. Ortiz with a sophomore will be interesting. T.O. opens at Harvard Westlake on March 8 and is at Palos Verdes on March 9. That doesn’t leave much time to figure things out.