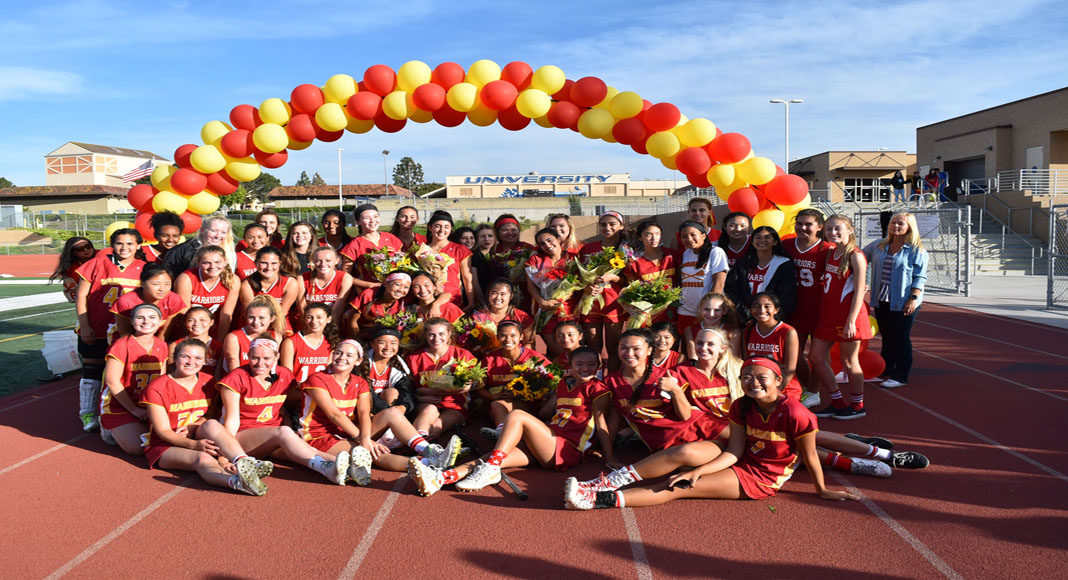 The Woodbridge Warriors head into 2018 with their three top scorers returning, the youngest roster in program history, and a team that finds time for the weight room and the classroom.   Head coach Grant Davis offers up five things to know about the 2018 Warriors.

The Warriors recently named seniors Jelena Pompay and Hope Hofseth as Team Captains for the 2018 season. Jelena is a returning 1st Team All-PCL midfielder and the team’s best two-way player. Hope is an athletic and versatile attacker. Both have shown the energy and drive to pull together a young and diverse Warrior squad, staying after practice to pass with teammates, and teaching JV players how to do wall ball and develop specific skills.

With Jelena, Hope, and junior Sofia David, the Warriors return all three of their leading scorers from last season and five of their top six attackers overall. David led the Warriors in scoring last year with 27 goals scored. The experience the attack and midfield gained last year should result in more diverse, efficient, and consistent goal scoring this season.

The Warriors lost to graduation three of its four starters on defense from last season, including three-year starters Sarah Morgan and Mia Ajiro, as well as starting goalie Sara Sloniger. A young, aggressive, and athletic group is competing to fill those roles and make an immediate impact, led by returning starter junior Miso Ko.

Youth Will be Served

This will be the youngest Varsity roster in the program’s eleven-year history. Half of this year’s Varsity roster will be either freshmen or sophomores, most of whom picked up a lacrosse stick for the first time the summer before their freshman year. The program prides itself on its player development and building a life-long love of the game in new players, including this enthusiastic, athletic group.

The Warriors work hard both in the classroom and on the field all year long. One key to their success is their year-round Olympic lifting and strength and conditioning program, led by Woodbridge Head Strength and Conditioning Coach Eric Burkhardt and Head Coach Grant Davis, a former NSCA certified Strength and Conditioning Specialist. All of that dedication to fitness and wall ball does not keep the Warriors from their studies however, as a remarkable 75% of the team achieved a 3.8 GPA or higher last year!